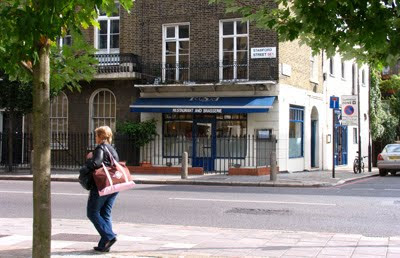 RSJ Restaurant
Last night we had dinner with Jean-Pierre and Florence Chevallier (Château de Villeneuve) at the RSJ Restaurant in London's Waterloo. JP and Florence are over for their UK importer's Thorman Hunt tasting which is on today.
One hesitates to take non-Loire wines to the RSJ Restaurant. Out of some 200-250 references on the wine list, there are just nine outside the Loire Valley – three Champagnes, three Beaujolais, a Bordeaux red and two from New Zealand – a Sauvignon Blanc and a Riesling.
However, I thought it would be interesting, even though it might shake the restaurant to its core, to share some different bottles with the Chevalliers, so I took along: 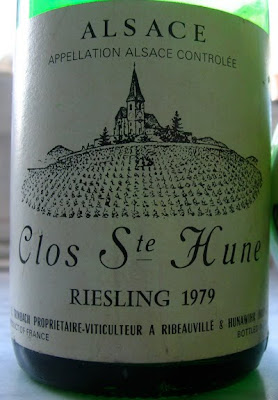 
The Riesling was decanted soon after I arrived and briefly served blind. Jean-Pierre immediately thought it was either an old Chenin or a Riesling – remarking that as wines from these two varieties quite often show considerable similarities with some age. Although not kept in the best conditions since we bought it sometime in the early 1980s at Trimbach in Ribeauville,  the 1979 showed well with dry honey on the nose, a steely edged richness that developed in the glass and clean blade-like Riesling acidity. 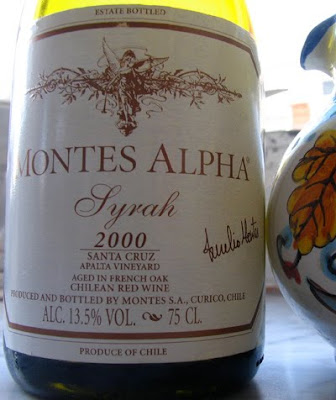 2000 Syrah, Montes Alpha
The 2000 Montes Alpha Syrah was also decanted and like the Riesling showed well and developed in glass. Mid-weight and attractively spicy with a smokiness and although different from a northern Rhône had a restrained finesse – certainly not in your face New World Shiraz. JP remarked that it went particulalry well with his duck breast.

We finished with a glass or so of the 2007 Les Rouannières from Château Pierre-Bise – zippy citrus fruits with lovely freshness, balance and precision.

Jean-Pierre Chevallier will be back at the RSJ with Yannick Amirault when they will be starring in a double bill – a tasting and dinner on Tuesday 13th April.
*
Decalaration: Jim is a consultant to the RSJ Restaurant.
Posted by Jim's Loire at 10:28