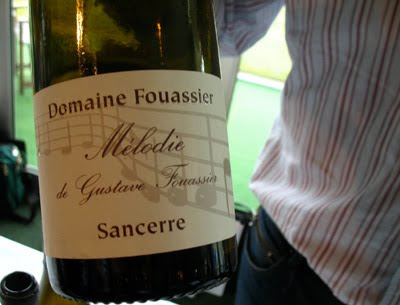 This was a useful opportunity to taste a good number of Loire wines fairly quickly. I was rather unusually well organised for the tasting as I had downloaded the tasting catalogue in advance and printed off the lists from exhibitors showing Loire wines. Something worth doing as it saved a lot of time scrabbling through the 105 page catalogue on the day.

Highlights included the rich and opulent 2008 Quincy from Phillippe Portier and the soft and concentrated 2006 Concerto Saint Nicolas de Bourgueil, Vignoble de la Janoterie These two producers are looking for UK importers. I tried all the 2009 Sauvignon Blanc AC Touraine Ambassadors, the Interloire project involving Interloire). From these I'd pick out: quite concentrated Ante Vinum, Château de Quinçay (Meusnes in the Cher Valley and a producer of Touraine and Valençay),  the very zippy and fresh Domaine de Fontenay (Didier Corby), the 2009 Châteauvieux from Pierre Chainier, the Cristal Buisse (Paul Buisse – now part of Pierre Chainier) and Domaine Gibault (Les Martinières, Noyers-sur-Cher).

I tasted the full range on show from Domaine Fouassier (Sancerre) – represented on this occasion by Benoît and Paul Fouassier and the ever green, Michael Ott, The estate is in full conversion to biodynamic viticulture  and tasting these wines confirms my view that this a domaine on the move. Among the around dozen wines tasted I particularly liked the mouthfilling 2008 'sur la fort' white Sancerre from limestone slopes and the weighty and minerally 2008 Les Chasseignes (clay and limestone). Although they have been making Melodie de Gustave Fouassier since 1996, I hadn't come across it before. This Sancerre Blanc is a blend that is selected at the momenrt of pressing and then fermented for around 10 months in wood. Only 3000 bottles are made, which is probably why I haven't encountered it before. There is still a touch of wood on the 2006 but it has attractive rich and toasty fruit.

It was good to taste some of Daniel Lambert Wines Ltd's selection of Loire wines including those from Domaine Villageau in the Coteaux du Giennois like the clean and weighty 2009 white (100% Sauvignon Blanc) and too reds that have a minimal percentage of Gamay – presumably to comply with the absurd AC regulations that ban 100% Pinot Noir and insist on a small percentage of Gamay. The 2008 Les LiCôtes has an attractive, ripe Pinot Noir character of some structure. Aged in wood it doesn't need its small drop of Gamay. Under the VDQS regulations Villageau could market a 100% Pinot Noir, if AC regulations were based on common sense they would be able to sell a 100% Pinot Noir as an AC Coteaux du Giennois.

Daniel had a couple of 2008 Sancerres from Balland-Chapuis – I preferred the more mineral La Vallion to the other Sancerre that rather dominated by asparagus notes.