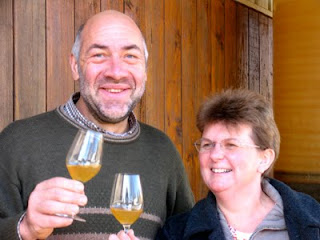 Vincent and Catherine Ogereau, Domaine Ogereau
With a light dusting of snow when I got up around 5am and flakes still falling  there was a concern that our journey from London to Saint-Lambert-du-Lattay would prove difficult. Fortunately the fears were groundless and we arrived at Domaine Ogereau almost on the stroke of 3.30 as arranged as, apart from the odd flurry of snow, the journey was uneventful. We were soon tasting with Vincent and Catherine Ogereau – a few 2009s with the rest from 2008 and 2007.
The news from Vincent and Catherine is that they are considering slightly simplifying their range dropping their Anjou Blanc Cuvée Prestige. In the future they will have two dry whites: their Savennières and Anjou Blanc sec, which will be pure Chenin with the Chardonnay that used to be part of the Anjou Blanc blend being used for their Crémant de Loire. They are also likely to simplify their sweet wine range. Again dropping the Cuvée Prestige and having the light and versatile 'generic' Coteaux du Layon Saint-Lambert and the single vineyard Bonnes Blanches. They would hope to make the Bonnes Blanches every year with less of an accent on the sugar and more emphasis on a refreshing citric character.
Stand out wines from the tasting:

The still infantile 2009 Houssaye is already showing a lot of promise but there is a long time to go before it is bottled. 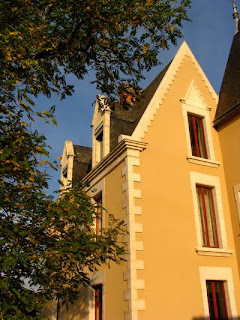 The next rdv was just across the Layon at Pierre-Bise with Claude and Joëlle Papin. Claude is running an experiment on not using sulphur on a small number of bottles of his 2007 Anjou Blanc Haut de la Garde. We started the tasting by comparing the 2007 without SO2 with one with the normal dose that Claude uses – both wines came from the same vat and were bottled on the same day. The bottles had been open for five days. The one with sulphur was a little more deeper – more golden in colour. It was also had more aromas with no signs of oxidation. When bottling Claude had used CO2 to give the unsulphured wine more protection. He is now carrying bottles around in his car to see how it will react to changes in temperature etc. An experiement to follow!

Stand out wines from the tasting:

2008 Roche aux Moines, Savennières
Honey and floral nose, lovely concentration and balance – one of those seamless wines where everything is in harmony. This was recently bottled because its malo started late – 75% complete. Unanimously our favourite wine.

More detailed notes on your visits to follow in the next week or so.