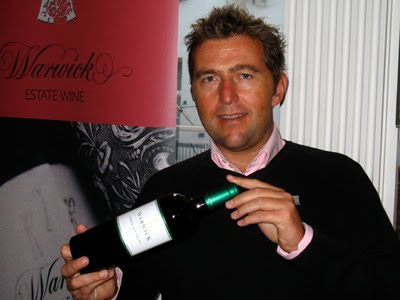 A relaxed Mike Ratcliffe with a bottle of the 2007 Cabernet Franc, Warwick Estate
It was off to the Louis Latour annual portfolio tasting this afternoon, primarily attracted by the opportunity to taste the Michel Redde wines (report to follow). While there I took the opportunity to catch up with Mike Ratcliffe (Warwick Estate, Vilafonté) and, in particular, the Warwick 2007 Cabernet Franc.
Mike parents, Norma and Stan, were the first producers to plant Cabernet Franc in South Africa with their first vintage in 1985. Having tasted the Warwick Cabernet Franc I have to wonder why there isn't more Cabernet Franc planted here. The fragrant 2007 (case: £133 + vat) was the latest vintage on show with attractive soft, round fruit and enough structure to allow it to age. I guess that Cabernet Franc continues to be overshadowed by its noisy and robust offspring: Cabernet Sauvignon, whose brashness doubtless came from the genes of Sauvignon Blanc – the other parent.
Mike told me that there are plans to hold a vertical tasting of the Warwick Cabernet Francs in London some time this year. Ought to be a fascinating occasion! 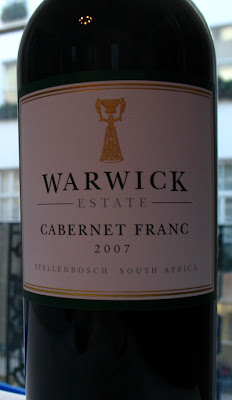 Jim, I think the Warwick family was originally from Edmonton Alberta.

Have left a comment on the Warwick blog, so may ne Mike will pick up on your comment, Bob.

Aha - indeed Mike will pick up. Yes, Norma Ratcliffe my mom was born in Edmonton. More to folow on Cabernet Franc vertical - we have been waiting some time to do this.
Announcement will come via www.warwickwine.com/blog

Thanks Mike. Look forward to hearing more about the vertical.