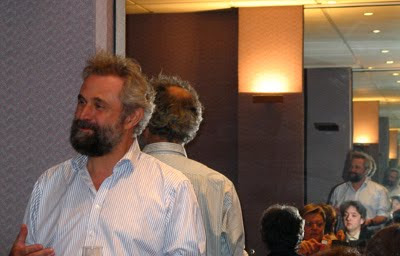 Charles Sydney: 3rd February 2009
Charles and Philippa Sydney have been based in the Loire since 1988 working as courtiers to supply the UK wine trade with Loire wines. Every year they produce a vintage report.

Charles and Philippa Sydney’s 2009 Loire report: the Smiley Vintage
'2009 is going to be a great vintage for us right across the Loire, though some areas are a touch less even than we’d have liked. And given the economic hassles that follow frost and hail damage in 2008, la crise and a god-awful exchange rate, that’s a blessing!

It all started with a real winter (minus 13° here in Chinon!), early summer storms (including viciously damaging hail that effectively wiped out the crop in Menetou-Salon and large swathes of the Coteaux du Giennois) and a hot, dry and long summer that ran all the way through to the end of October, by which time the reds were safely in and the growers in the Layon were starting to think ‘raisins’ instead of grapes.

14th September, Muscadet was the first to kick off and results are good, with some truly great wines (no exaggeration) from the likes of Jérôme Choblet, Pierre Sauvion and the team at Domaine de la Fruitière in the heart of the Sèvre et Maine.

Great because the guys had learnt the lessons of 1991 (spring frost in 2008 = low yields = vines over compensating in 2009) and had pruned hard before going back into the vineyards to de-bud in the spring and then thinning out any excess crop in the summer. These wines have lovely fruit, wonderful concentration and balance and are on a par with 1989 and 1997.

Unfortunately, too many growers have short memories and were happy to let nature have its say – and the result is simple: higher yields, less concentration and some dilution, especially true for wines sold in bulk. That said, the grapes were healthy, the wines are nicely balanced and will be easy to drink, full of fruit and sensibly priced.

A week later, the Sauvignon producers of the Touraine started picking – and the wines are really, really attractive. Despite 2008’s low yields, this year’s crop is reasonable* (say 60 hectos / hectare on average, which suits Sauvignon right down to the ground) and the grapes were healthy and ripe. With the more committed growers we’ve got an extra dimension : big, ripe wines with depth, sweet fruit and loads of fresh sauvignon aromas - think citrus and box wood and cut out the cat’s pee!

In Sancerre and Pouilly the harvest ran over a wider period, starting 18th September, with some growers waiting till the end of the month before picking (in Menetou some hail-hit growers didn’t pick at all).

In Pouilly, Christophe Denoël, director of the excellent co-op reckons on the same overall yields as last year, so we’re looking at a low 48 hectos/hectare (vs the permitted yield of over 60) That said, the wines have an almost cristaline purety and concentration that is far superior to the rather lean 2008s.

Over in Sancerre, yields are variable - most growers would say low (the cynic in me says they always say that), with some areas - notably the Chêne Marchand in Bué - being badly hit by hail, with guys like François Crochet in Bué bringing in just 32 hl/ha.

The only downside of the fine weather and low yields is that some growers at that end of the river chose to wait for some rain to swell the grapes, soften the skins – and give higher yields. As the rain didn’t come, that was a definite no- no, resulting in high degrees, high acidity and a lack of Sauvignon aromas. So stick to the best growers: the quality is fab! Imagine 2003 ripeness with the freshness of 2006 and you’ll get the idea.

The comparison with the truly great vintages holds for the Chinon, Bourgueil and Champigny reds too, with the summer heat and drought giving conditions similar to 1989... though this time we got even luckier, as the drought was broken with 4 days of light rain in September, restarting the vegetation and pushing the crop to a real if late maturity, with the bravest growers hanging on till the 19th October before starting to pick! The results are outstanding – wines with more ripeness and fruit than 1989, maybe more on a par with 1990. In Bourgueil, Jacky Blot rates this as better even than 2005.

Finally, the Chenins. The dry wines in Vouvray, Montlouis and in the Anjou are delightful, with loads of fruit, concentration and balance. Reasonable yields, fine weather and continuing efforts in the vineyards in the Anjou really paid off. In Vouvray the guys are chuffed to bits, bringing in fruit-rich secs and demi-secs before starting their selective tri picking for moelleux. The Jeremiahs of this world may say that the dry wines are just that bit ‘too ripe’ to make great wines for keeping, but that’s their problem – I always thought great wines were for drinking!

And for afters?** In the Coteaux du Layon, the wines are lovely, even if some growers grumble that November’s rain stopped them making really concentrated show-stoppers. There are plenty of delightfully pure ‘entry-level’ moelleux – like Denis Goizil’s ‘straight’ Layon - coming in at over 18° (you’re already talking 100 gms/litre residual sugar), while some of the top cuvées – like Stéphane Branchereau’s Quarts de Chaume and Jo Pithon’s Les Treilles – came in at around 24°... So who’s got a big grin, then?!'

* Those hit by hail in the Cher Valley will have made very substantially less than this. (JB)

** Afters? Surely not wise to encourage the UK wine trade in their fixation that any sweet wine should be called a dessert wine!
Posted by Jim's Loire at 10:02