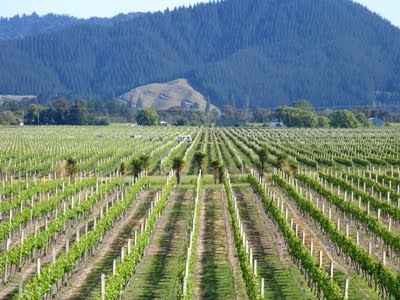 'A French winemaker's attempt to sell its "Kiwi Cuvee" wine in Australia has gone flat.

Winemaker Lacheteau, based in the Loire Valley, already sells its sauvignon blanc, labelled Kiwi Cuvee, in Europe and Britain.

However, an attempt to register it in Australia caught the interest of New Zealand Winegrowers, which has opposed the move.'

Lacheteau is now owned by Grands Chais de France and have been selling Kiwi Cuvee in the UK and mainland Europe for a number of years. It is not clear whether it can be sold in New Zealand – am seeking clarification on this. Lacheteau was originally set up by André Lacheteau in the second half of the 1980s and was based at Neuil-sur-Layon and Doué-la-Fontaine. It had a rather chequered history with André involved during the 1990s in a court case over social security payments and mislabelling of an appellation wine. Grands Chais de France bought Lacheteau in 2005, having bought Vinival, a substantial négociant company based in the Pays Nantais the previous year. Vinival also owned Château Champteloup near Martigné-Briand.

The story is covered in a number of other papers including the New Zealand Herald.

Comment from David Cox, director Europe – New Zealand Winegrowers (13.1.10)
'It appears that the decision to reject the application to register Kiwi Cuvee in Australia was back in October 2009 and so I’m not sure why the Times and Telegraph only just picked it up. It relates to Australia only and New Zealand Winegrowers felt that the use of the Kiwi name there was too much and the tribunal agreed. The French owners have not tried to register it in NZ but if they did we would challenge it strongly.

We do not particularly like its use here in the UK and Europe but, as you know, it has been here for some time and we will not be challenging it here. There are many other uses of the name Kiwi (polish and the fruit etc) and so it would not be straightforward anyway. We do think it ironic that the French want to emulate NZ in this way but we don’t feel that too many consumers are fooled given the way that retailers merchandise wines by country on the shelves etc.'