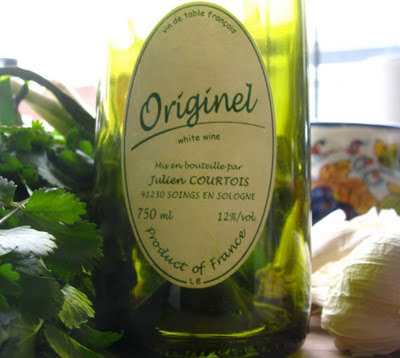 The Courtois family are one of the cult vignerons that I really ought to have visited by now. Something I will have to put right soon. My failure to visit or know more about their wines is partly due to never having had happy experiences with Claude Courtois' wines on the few occasions that I have tasted them. I remember one red (although not its name – though it may well have been Racines – a red) opened in Epeigné a few years ago that was undrinable and was poured down the sink. About three or four years ago Claude was at the Renaissance tasting in Angers but I was no more impressed.

However, a number of years ago Randall Grahm (Bonny Doon) was full of enthusiasm for this wonderful Loire producer he had met at a wine fair in Brussels. It was Claude Courtois and, although Randall has a highly developed sense of humour, I think on this occassion he was serious.
So to Originel (vin de table français) from the 2004 vintage* made with 100% Menu Pineau by Claude's son, Julien. It has to said that Originel is also quite challenging, particular in respect to its colour and nose. The colour is quite a deep gold – certainly pretty deeply hued for a wine of this age, although it is vinified in oak, while the nose has quite marked oxidative notes. I imagine that there is little or no sulphur used here. In contrast the palate is much fresher still with some oxidative notes which here add complexity to the minerality and clean acidity. We drunk this over two nights as an apero and I fancy that the second night the colour was deeper and the oxidative notes a little more marked.

It is good to see producers working with Loire varieties like Menu Pineau (also called Arbois) that used to be more widely grown than they are now. Pascal Potaire in the Cher Valley is another producer making Menu Pineau – on this evidence I prefer Pascal's. Thierry Puzelat is another producer working with Menu Pineau. It remains a permitted variety in Vouvray (almost a slightly guilty secret!), Cheverny and Valançay. Having a range of varieties that have a local history is part of France's patrimony and it would be good to see France's wine authorities wanting to cherish and encourage this diversity even though hectares of just Sauvignon Blanc would be easier to sell. 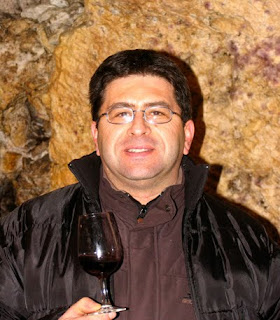 Pascal Potaire (not Menu Pineau in the glass!)

* Douglas Wregg (Les Caves de Pyrène) told me they would be sending the 2004 vintage. However, there is an L6 marked at the bottom of the label, so it may actually be 2006. As a vin de table français there can be no mention of the vintage on the label. I'll have to check with Douglas.
Posted by Jim's Loire at 14:33