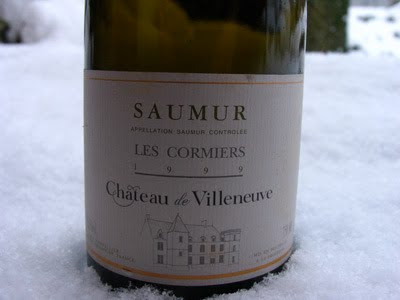 1999 Les Cormiers, Saumur Blanc, Château de Villeneuve in the snow
Once again another example of the great cork lottery: two bottles of 1999 Les Cormiers, Saumur Blanc from Jean-Pierre's Château de Villeneuve on Wednesday night to celebrate a nephew's birthday. The first was deep gold and noticeably oxidative, although this became considerably less marked with a little time in glass. In contrast the second bottle was sublime with all the qualities of the first – the honeyed nose, mouthfilling palate and lovely balance – without the oxidative character and all in all greater precision. A wonderful reminder of the magical quality of Jean-Pierre's 1999 Les Cormiers. This was the first year that JP shaped his grapes in July – matching sure that the bunches were well spread out and that each was as perfectly shaped as possible.

As both bottles of Les Cormiers came from the same case and have been stored together, the only variable is the cork. There are those who maintain that variations between bottles are part of the charm of wine. I cannot go along with this nonsense: a producer works for the whole year in their vineyard to grow the best possible grapes and then in the winery to produce the best possible wine and then all their efforts are subject to the lottery of cork.

Interesting to see that Jamie Goode selected the screwcap as his personality of the last decade on his wine-anorak blog. Certainly the brave move by the 16 Clare Valley Riesling producers back in 2000 to go for screwcaps has had a big impact over the last decade, especially in Australia and New Zealand where screwcaps have become the norm. It has also forced the previously complacent cork producers to raise their game.

As I have already commented in previous posts the Loire has been slow, along with the rest of France, to embrace scewcaps, although their acceptance and use are now gaining ground. However, we are yet to see a major, top quality producer in Sancerre or Pouilly-Fumé opt to use screwcaps on their top cuvées. As we are at the start of the teenage decade, I'll predict that by the time 2020 comes around very few Loire whites will be still closed with cork. Instead producers will have moved to screwcaps or possibly another alternative closure but not synthetic corks. I expect to see the most rapid change to occur in Muscadet.

Also on Jamie's blog is a report on the Semillon used in the crucial AWRI closure trial.

Excellent post, a very interesting read. Any thoughts why white wines seem much more prone to oxidation than reds? Is it simply the lower extraction of phenols from the skin and seeds? 'Premature' oxidation seems a much more prevalent phenomena in Loire and Burgundy whites than their red counterparts.

I've read that properly aged Chenin Blanc is one of the truly special wines of the world. But it seems to be a risky investment when the best examples require both time and money, yet could suffer an early death.

Not sure that Chenin Blanc is more prone to oxidation than a red wine. The oxidation on Les Cormiers was I'm sure down to the cork rather than the wine.

I should add that oxidation is more obvious on whites rather reds.