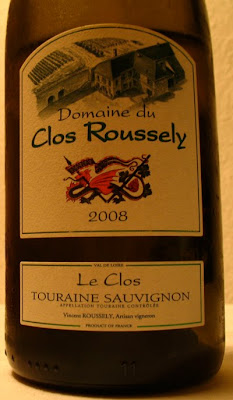 Last night we had a very successful first event of 2010 at the RSJ – a tasting and dinner featuring wines from the cellar of propietor, Nigel Wilkinson. The only Sauvignon was the aperitif – 2008 Sauvignon Blanc from Vincent Roussely's Clos Roussely – all the other whites being Chenin Blanc. Again Vincent's Sauvignon showed why it has proved so popular over the past year with its combination of ripe fruit – grassy with a hint of gooseberry – and freshness. 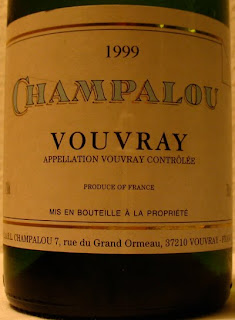 The Champalou 1999 sec was on fine form with the typically softer Champalou style compared to the more mineral and austere style from Domaine Huet and Bernard Fouquet (Domaine des Aubuisières). Still youthful after ten years with good texture and a backbone of acidity partly hidden by a touch of sweetness. 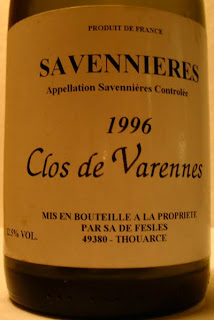 There was considerable bottle variation between the two bottles served – one was quite oxidised while the other one much fresher. Presumably down to differences between the corks. Clos de Varennes came from Pierre Soulez's Château de Chamboreau and was sold by Bernard Germain of Château de Fesles. It was certainly vinified in wood with a fair proportion of new wood. I'm sure that this overseen by Bernard's team but I need to recheck. The more oxidised bottle was cheesy, yeasty and oily, while the second was much fresher. We decanted both bottles and both were improved by this aeration. 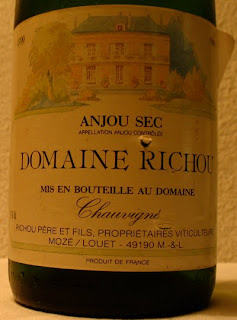 The last time we tried an aged bottle of Domaine Richou's Anjou Blanc sec it was a rare bottle of the serious frost affected 1991. Sadly it was completely oxidised and undrinkable. Fortunately the 1990 was still in good shape – clean, fresh with good length and dominated by truffle aromas. A reminder that rearing truffles (if that is the correct word) is becoming increasingly popular in the Loire, especially in Touraine. 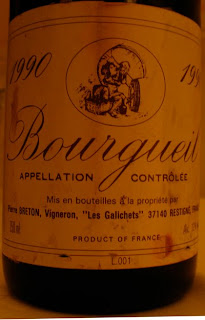 We had intended to serve Pierre Breton's 1990 Bourgueil with the main course with the 2002 Anjou Villages from Domaine des Rochelles as the interlude red. However, tasting it beforehand we felt that Pierre's wine was too delicate to stand up to the beef, so we swopped the two wines around.


This 1990 Bourgueil comes from gravel vineyards and has the charm of aged Loire Cabernet Franc. Much more in style of an evolved, delicate Burgundy than a more robust and powerful Bordeaux. Small wonder that a number of the top Loire vignerons look at Burgundy for kinship. Bricky and fairly light in colour Pierre's wine has attractive savoury fruit and more weight than you would initially imagine. 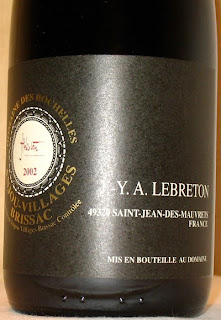 The domaine Anjou-Villages is always either 100% Cabernet Franc or in the vast majority with just a little Cabernet Sauvignon, while La Croix de la Mission is 100% Cabernet Sauvignon or virtually so. 2002 is one of those vintages when a good autumn saved the day after a poor summer with the sun coming and staying out and the wind round to the east. Fortunately this tends to happen fairly frequently – 2007 and 2008 being further examples of this trend.

2002 reds are not heavyweights but like other wines from this vintage they have a magic balance. This has an attractive blend of red and black fruits and is certainly ready to drink now, although it could be kept another two or three years. 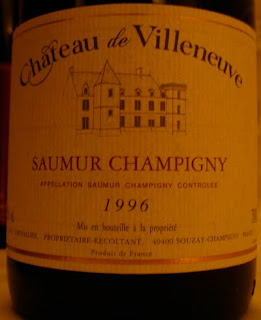 1996 is one of my favourite red wine vintages in the Loire – classic in style and aging very well as the occasional bottle of Villeneuve's 1996 Grand Clos demonstrates so enjoyably. It is some time since I have tasted the straight 1996. Naturally it doesn't have the full concentration, power and structure of Le Grand Clos but it does have attractive black fruit, medium structure and is still youthful for a nearly 14 year old wine. 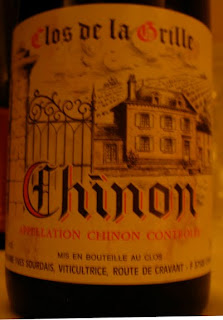 This domaine is just to the east of the town of Chinon not far from Philippe Alliet's Coteaux du Noire but lower and slightly to the west. 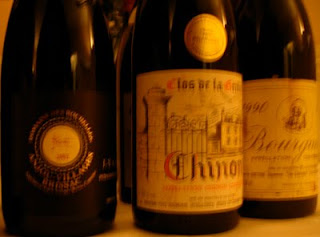 To be continued – but may be a while with several tastings on today: Liberty Wines and French Independent Wine Growers. In 1989 the Clos was owned by Mme Yves Sourdais. However, I visited the domaine sometime in the later half of the 1990s (I think) it was owned and run, as it is now, by Marie Raffault. 1989 was a hot and dry vintage – among the best of the 20th century. Mid-weight, this has the soft, ripe fruit more typical of a vineyard further south that is characteristic of 1989, which you see again but even more so in the 2003 heatwave vintage.

Of the three reds that accompanied the particularly delicious beef the Clos de la Grille was the very clear favourite both with and without food. I was quite surprised by this strong preference as I thought that both the 2002 Anjou-Villages and the 1996 Saumur-Champigny had strong points.

We finished with two stunning wines from Domaine Huet:


Both have that wonderful balance of the 2002s, which the 2008s also show. Le Mont is all precision, mineral and austere, while Le Bourg is a little richer, a touch honeyed but still with marvellous precision and minerality. Two wines that have a very long life ahead of them.

They were served before the dessert – walnut tart, poached pear and coffee ice cream. There was one claim that they worked with the dessert but I think they are better, as both are moderately sweet rather than super sweet, drunk with cheese, patés, perhaps even Pekin duck. With hindsight it would have been interesting to serve Le Mont with the roast scallops.