Two recent wines that I have enjoyed: a 2008 Touraine Sauvignon from Antoine Simoneau in Saint Georges-sur-Cher and the 1999 Vieilles Vignes Saumur-Champigny from Château de Villeneuve. 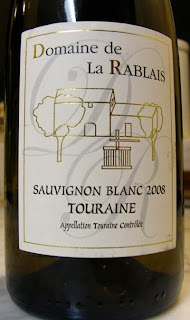 2008 Sauvignon Blanc Touraine, Domaine de la Rablais
The Simoneau family has made big efforts to sell a considerable part of their production at the cellar door with a well stocked shop, open days and special weekends. This 2008 shows good ripeness – no cats' pee or vegetal flavours in sight – rather gooseberry, grapefuit and a touch of yellow plum, soft mouthfeel and some refreshing acidity. I still need to write up a visit I made there back last June. Sauvignon Blanc is their most successful variety and overall whites are better than the reds. It would be good to see them move away from the use of weedkillers but with 60 hectares it is easy to suggest such a move; much harder to put into practice. 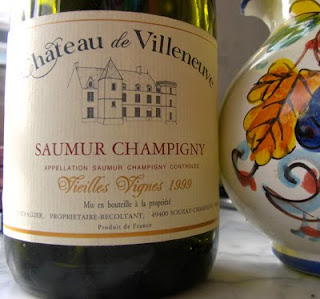 Having decided on Tuesday evening that we deserved a mid-week treat, it was then a matter of choosing what this should be. In the end it was easy – a 2000 Grand Cru Saint-Emilion was easily discarded in favour of the 1999 Saumur-Champigny Vieilles Vignes from Jean-Pierre Chevallier's Château de Villeneuve. This is drinking really well now – around its best probably as I don't think it will get better but equally it is not about to fall off a cliff. It has lovely Cabernet Franc fragrance as well as a touch of animal, soft rich fruit and still a structure of rounded tannins to hold everything together.
Posted by Jim's Loire at 22:30