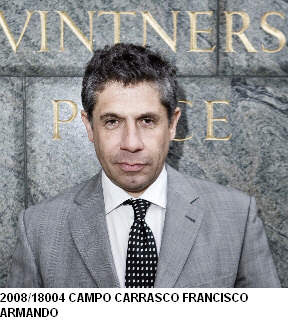 However over the summer 2009 it emerged that there is a warrant for the arrest of Pancho Campo for fraud issued in Dubai, United Arab Emirates and a red notice on Interpol’s website naming him as a fugitive from justice.

Adam Lechmere and I broke the story on decanter.com on 4th September 2009. On 19th September it emerged that Pancho Campo had been sentenced in Dubai to a year’s imprisonment in June 2003 to be followed by deportation.

On September 1st PC started to contact the speakers at WineFuture Rioja09. In his email he claimed: ‘However, it has been brought to my attention, approximately two months ago that I have a case pending in Dubai regarding the dissolution of the mentioned company. Apparently, in July 2003 I was due to appear in court in Dubai.’ Describing ‘this unjust and unfair situation’ he asked for the participants ‘support and understanding.

Certainly he has continued to have support from people like Jancis Robinson MW, Steven Spurrier and Robert Joseph as well as Siobhan Turner, executive director of the Institute of Masters of Wine.

Much of the circumstances of the court case remain unclear. This much is known:

5th June 2002: Pancho Campo is charged in Dubai with breach of trust following a complaint by his business partner – Jackie Wartanian. The misappropriation of 640,000€ was alleged. Campo surrenders his Chilean passport to a Dubai court.

February 2003: Campo and his family leave the United Arab Emirates.

1st June 2003: Campo found guilty in absentia of breach of trust and is sentenced to a year in prison to be followed by deportation.

March 2009: Campo questioned by French immigration official at Charles de Gaulle in relation to the Interpol red notice and the Dubai court case.

••
Just a business dispute!
Some of Pancho Campo MW's defenders have claimed that this is purely a business dispute between ex-business partners. This is not correct: fraud is a criminal offence and if this were purely a civil matter Interpol would not be involved and PC presumably would not have been detained by the French immigration authorities at Charles de Gaulle Airport in March 2009 nor apparently by Spanish police in a leading Madrid hotel earlier this year. Equally ,if it was a civil matter, it is unlikely that PC would have had to hand over his Chilean passport to a Dubai court.

According to The National (19th September 2009) 'Ms Wartanian’s lawyer, Amna Jallaf, said a civil case had also been filed against Campo'.

••
Miscarriage of justice!
Pancho Campo and his defenders have suggested that he is a victim of a flawed justice system in the United Arab Emirates. Not a shred of evidence has been put forward to support this claim. Vicente Cacho, the Spanish Consul in the UAE, is very far from leaping to PC's defence. I suspect he would prefer that Pancho Campo returned to the UAE and for justice to take its course. This smearing of the legal procedures of the UAE rather conveniently ignores the regrettably not infrequent miscarriages of justice that occur in the UK and the US.