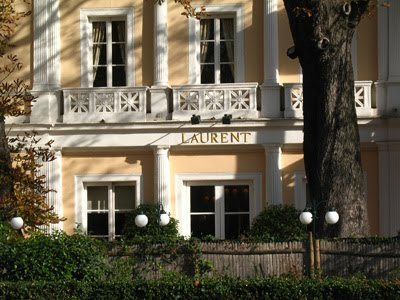 Restaurant Laurent, Avenue Gabriel, Paris
In Act One of the tasting and lunch at Restaurant Laurent in Paris we tasted example sof the 2008 wines from each of the 16 members of Vignobles & Signatures – Le Club des Grands Domaines. All three Loire wines showed well:

2008 Soleil Nantais, Muscadet-de-Sèvre-et-Maine sur lie, Guilbaud Frères
"Not a good vintage," Pascal Guilbaud told me. Perhaps not, although I fancy Pascal's view may be coloured by 2008 being serious frosted affected as this 2008 is showing attractively. It has some palate weight and is very much in the style of 2008 – clean lemony and precise. Would be an excellent partner to a plateau fruits de mer or a simple grilled sole. At 6.06€ including TVA from the cellars this is very decent value. 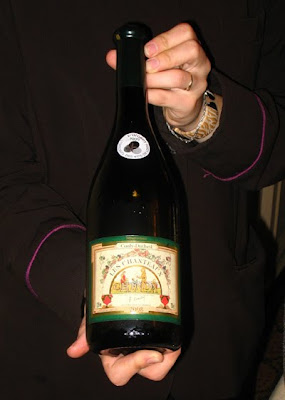 2008 Les Chanteaux Chinon Blanc, Couly-Dutheil
There are now some 36-37 hectares of Chenin Blanc planted in the Chinon appellation with a stop on further planting, so Chinon Blanc is going to remain somewhat of a curiosity. Les Chanteaux has attractive peach and apricot fruit, texture and length with enough acidity to balance the 14% alcohol. Would be interesting to try this with a rich pork dish or pheasant cooked with apple and cream (à la normande). 10.50€ from the cellar. 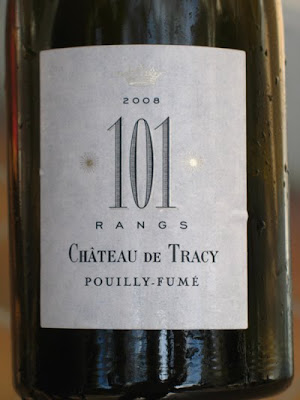 2008 101 Rangs Pouilly-Fumé, Château de Tracy
Then a new wine from Château de Tracy – 101 Rangs from the silex (flint) vineyards by the Château itself. The vines are around 55 years old and the yield in 2008 was 35 hl/ha. Only some 3000 bottles a year will be made. This is the companion wine to Haute Densité, which is planted on limestone in a vineyard to the south east of the Bois Gibault on the road leading to Les Berthiers. In contrast the vines for Haute Densité are only seven years old, although the yield in 2008 was only 30 hl/ha during to hail damage.

2008 101 Rangs is an impressive début with grassy and grapefruit aromas and flavours , weight and underpinned by citric, mineral acidity. Can be enjoyable now but a further year or two in bottle may well add further complexity. 60€ a bottle – the most expensive wine in the tasting.

Away from the Loire the following wines impressed:

Jim, I was looking for Chinon Blanc when I was in London this past March. Everywhere I asked, I thought the exchange look was "where is this guy coming from?".
I do believe that as usual the folks at City Beverage made an effort to find me some TNs of past bottles they used to carry years ago. I love that place!

Waterloo Wine in London is listed on wine-searcher as a stockist of Chinon Blanc.