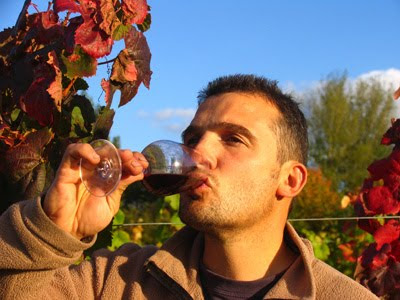 Jean-François (Jeff) Merieau with his deep coloured 2009 Côt (see below)
Dropped into see Vincent Ricard (Domaine Ricard, Thésée-la-Romaine) and Jean-François Merieau (Vignobles des Bois Vaudons, Saint-Julien-de-Chédon). Both have now finish their 2009 harvest – Vincent on Friday (having started on 12th September) and Jean-François this morning finishing off some seven rows of Cabernet Franc that remained. Both are equally happy with the quality and the quantity that this year has brought. Fortunately both escaped the hail that devastated parts of the Cher, especially parts of Angé and Monthou. 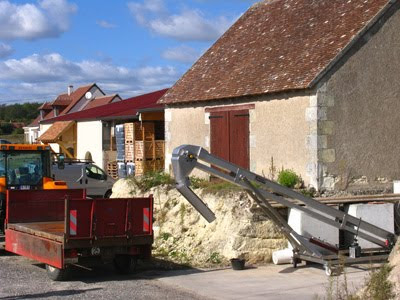 View of the Domaine Ricard winery
I tasted 2009 fermenting wines at both properties and once again the weight and purity of the 2009s is impressive, although will have to wait and see how the finished wines are. "2009 is a year when you can have both quantity and quality. My average this year is around 57/58hl/ha – Le Petiot at 60 hl/ha, while 42hl/ha for Les Trois Chênes." This suggests similarities with 1990 when the quality was excellent even with high yields, although Vincent would not remember 1990 as I guess he was still at schoool then.

Vincent has recently acquired a new 3.6 ha vineyard called Le Bouc overlooking the centre of Thésée. It was planted with "Gamay pourri" and other poor quality clones, which Vincent has ripped out and replaced with Sauvignon Blanc, for which he gets assistance from the EU towards restructuring the vineyard. They pay for the plants, the wires and the posts. Vincent now has 23 ha. 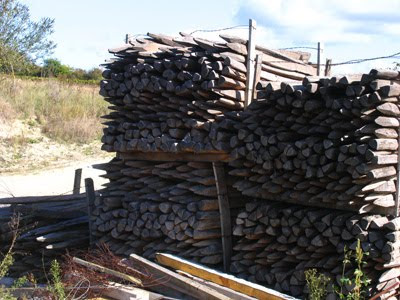 Vineyard posts
We also tasted some 2008 Sauvignon Blancs. Both 2008 Le Petiot (6.40€ at the cellar) and Les Trois Chênes (8.50€) are showing really well now, having taken on considerably more weight since I last tasted them in April. Just shows that some of these Sauvignons from the Cher valley are drunk too young and really need a year or so to be at their best. '? 2008' was bottled just before the start of the harvest. There is a lot of concentration there but it's quite lean and austere at the moment – just needs more time in bottle. The vines for '? 2008' are over 75 years old and were the first Sauvignon Blanc to be planted in the Cher Valley. 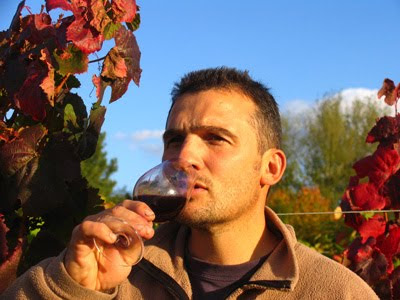 Jean-François with his 2009 Côt
Jean-François Merieau, Vignobles des Bois Vaudons
I started by tasting through the current range. The following wines showed best: the creamy Pétillant Blanc Brut, which is good value at 6.30€, the light and delicate 2007 Le Bois Jacou, Touraine Gamay (5€), and the powerful and concentrated 2005 Les Grands Champs Touraine Cabernet Franc (6€) – all smoky black fruits and needing more time. Apparently a US importer dismissed the idea of importing this 2005 Grands Champs saying 'it was too old'!

The tasting concluded with two Boa wines that have extended wood aging. Boa le Rouge (13.50€) is a 2006 Gamay. It has attractively soft Gamay fruit but the wood is quite dominant and drying in the finish. Not convinced that the wood brings much to the party – perhaps it just needs to be used more sparingly. Instead of Boa le rouge I'd rather have two bottles of the 2005 Cabernet and the change. Guele du boa (2006 Côt – 14.10€) is more successful – Côt has more power and structure to support the wood and this has good smoky, concentrated black fruits. Even so the wood is still dominant and this needs more time.

Then we went down to the winery and tasted the impressive 2009s in progress. I was very interested to learn from Jean-François that in the past the vignerons used to plant a few vines of Alicante Bouchet to give colour to their reds. Alicante Bouchet is a teinturier (a red fleshed variety). It is a Mediterranean variety, so it was a surprise that it ripened sufficiently in these cooler climes. 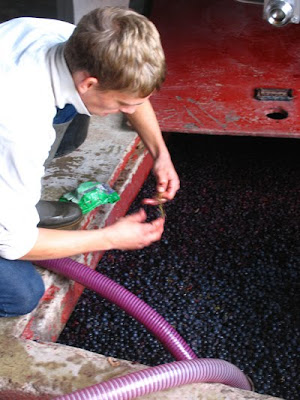 Hand destemming Cabernet Franc
While I was at the winery two workers, including the son of Xavier Frissant who is on a stage with Jean-François, were busy destemming the last of the Cabernet Franc by hand.

Thanks for the report, Jim. You're really providing a tremendous resource here.

I too have been enjoying Vincent's '08s immensely. "Le Petiot" was a house mainstay throughout the summer, while "Les Trois Chênes" has been riding a constant wave of change ever since it arrived on US shores. A bottle opened earlier this week was incredibly lemony and zippy when first opened. Sadly, the "?" rarely makes it to the US market and tends to be rather prohibitively expensive when it does.

I've been meaning to ask for a while.... Is Ricard's "Domaine de la Potine" bottling available in France? I sell it here but have never seen mention of it on your blog.

Never seen Domaine de la Potine in France and Vincent has never mentioned it. What is it please?

Like yourself, Jim, I've been to the estate yet am not entirely clear of the details. "Domaine de la Potine" is a Touraine Sauvignon that retails for about US$12 (about $3 less than for "Le Petiot"). My understanding is that it comes from a plot of young-vine Sauvignon that Vincent owns. I'd hazard a guess that he sells the whole lot to his US importer(s), which would seem to make sense given that you've never encountered the wine.