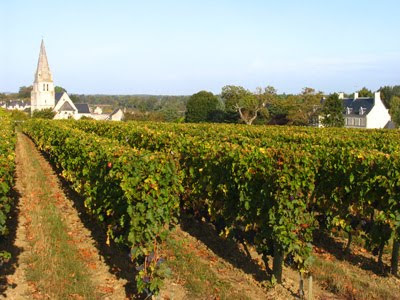 The church at Souzay-Champigny and Château de Villeneuve
Florence Chevallier, Château de Villeneuve, Saumur-Champigny
"We are well advanced now and I expect that we will finish on Tuesday. We started on Wednesday 30th September with the white – the Chenin was magnificent – and the Cabernet Franc on Friday 1st October. The Ban des Vendanges was for Monday 5th October but as our degrees were already high we were able to start early. Both the Cabernet and Chenin are between 13%-13.5%.

As the weather forecast was uncertain at the beginning of this week we decided there was no point in waiting, so we harvested quickly with a big group of 35 pickers. Normally we do two tris (selective pickings) with the Chenin but the grapes were so good that we picked everything in one go. Had we done a tri then the degrees in the second picking would have gone too high." 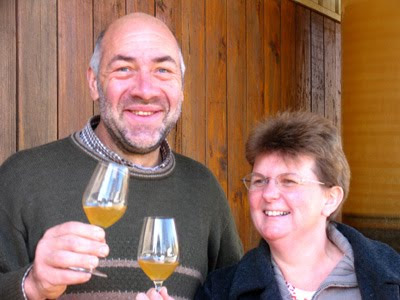 Vincent and Catherine Ogereau
I was delighted to learn that Vincent has now made a full recovery from his operation in May.

Vincent: "Our Chenin is really good – golden yellow. Last week we did a tri for the Layon and the grapes came in a 20% potential. The juice has very pure fruit flavours. This week I have been worried by the tropical conditions we have had – warm and humid – bringing the danger of rot developing in the Cabernet Franc. We picked for the Anjou Rouge yesterday – 12.8% potential and 4.4g acidity. it should be quite soft. Then we'll start the Cabernet Franc for the Anjou Villages on Monday. I'm out every midday in the vines tasting the grapes and the ripeness is now starting to change very quickly with the acidity dropping. We need to get on picking now – it is too risky to wait.

We've picked some Cabernet Sauvignon to make rosé, which should be superb, but I'm not sure whether the Cabernet Sauvignon will get ripe enough, so that we can make red with it. At the moment the tannins are not ripe. The very dry weather we have had since the beginning of June has slowed down the ripeness. We have a small yield for the Cabernet this year." 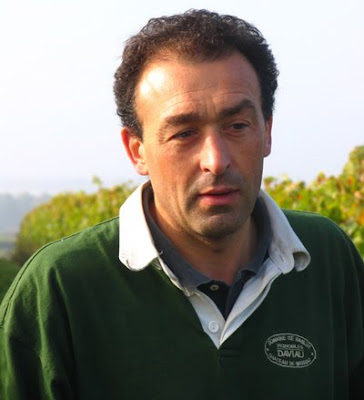 Christophe Daviau, Domaine de Bablut, Brissac-Quincé
"I think my Cabernet Sauvignon may well be riper than my Cabernet Franc. We've picked for the Anjou Rouge, which will have short time macerating on the skins so that it is soft and easy to drink. The Cabernet Franc on the limestone (AV Petra Alba) could potentially be very good, so I'm going to leave that for a while. For the Chenin we've finished the sec for Petit Prince and Ordovicien. The juice is 'super-beau' and very aromatic. We've also done a tri for the Coteaux de l'Aubance, which was at 19%-20% potential.

I'm a little bit disappointed by the yield but that's due to the dry weather, although the small amount of rain we've had in September and October has plumped the grapes up a bit. "