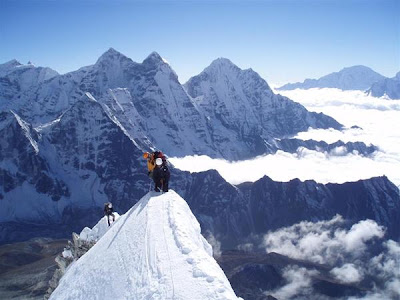 Ama Dablam (from the justgiving site)
16 year old Calum Macintyre and the rest of the summit team reached the top of Ama Dablam on Sunday and are now safely back in base camp. It may be that Calum is the youngest person ever to have climbed this peak (22349 ft). Many congratulations Calum! A great achievement for a very good cause.

He is raising money for The Teenage Cancer Trust. His sister, Esme, was diagnosed with a brain tumour three years ago when she was 11. Fortunately she had an immediate operation in Edinburgh on the rapidly growing tumour and has been making a slow but steady recovery ever since.

Details of the project are in the initial post here and further details are here on the justgiving.com site and also on Sandy Allan's teamascent blog. Sandy is a qualified International Mountain Guide and is accompanying Calum and Dave, Calum's father. Calum is my partner's nephew.