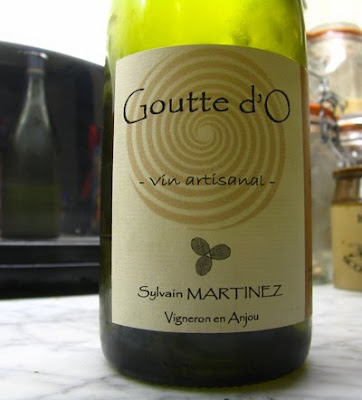 I suppose you could call Sylvain Martinez a disciple of Mark Angeli having done a stage with him before setting up on his own. He has two hectares of old vine Chenin giving tiny yields. Douglas Wregg's report on Les Caves de Pyrène Grapevine blog has some background on him. Les Caves supplied this sample.
The 2007 Goutte d'O (as in Goutte d'Eau or even Goutte d'Or) is typical of good 2007s with fine clean flavours and minerality but although dry it has real weight and richness from those low yields – touch of honey and some baked apple – all held together by zinging acidity.

At the Renaissance des Appellations tasting earlier this year in Angers Sylvain showed his 2008 Anglolide, which was then very clean, precise and mineral. The Goutte d'O is described as a vin artisanal, made without the use of sulphur, is unfiltered and opts to be vin de table with the vintage revealed through being called Lot 2007. Now that the vin de table restrictions on what can be included on the label I fancy we will see a considerable number of producers, perhaps particularly in the natural wine movement opt out of appellation contrôlée. Mark Angeli, Sylvain's mentor, has done so in 2009 as has Pascal Potaire in the Cher Valley. Part of the impetus coming from the belief that the AC system has done nothing to encourage more organic, sustainable viticulture.