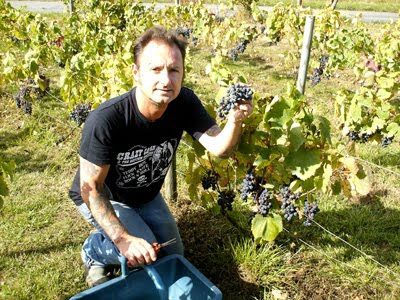 Mark in the 'grand cru' with a bunch of 2009 Côt – estimated at 0.28% of the harvest (photos courtesy of Mark Robertson)
As reported on Sunday evening the weather in Touraine has deteriorated with some four hours of rain from about 7.30-11.30am. Then it cleared up with some sunny intervals and a quite strong drying wind. Temperatures are still quite high – around 23˚C at 6.30pm. However, the weather looks more unsettled than its has done since we arrived, although fortunately the weather forecast on Méteo France is less bleak and wet for this week than it was showing last night.

Anyway today's rain persuaded Mark Robertson (Clos Chossay, Epeigné-les-Bois) that he should pick his Côt today rather than hanging on to later in the week. 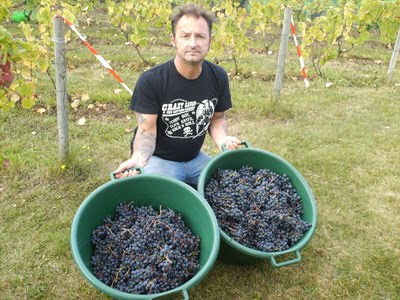 Entire crop of 2009 Côt
Mark Robertson: 'Did the Côt vendange this afternoon. The sun and a strongish wind soon dried the grapes out. Should get 25 litres minimum from 60 vines. Works out at 40hl/hectare if my sums are right (the Sauvignon was 27.5hl/hectare). Potential alcohol is 12.5% but I think this will creep up as there were a high percentage of desiccated grapes - some of which I measured at 16%. These will normally leach their sugars during fermentation. As the grapes were wonderfully ripe we didn't de-stem. We'll ferment on the skins/stems for about a week.' 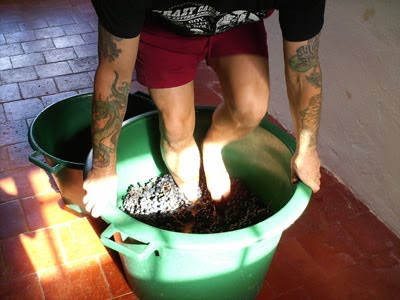 Given the small quantity of grapes, although of course perfectly formed, it would be inaccurate to describe Mark as a garagiste – far too high volume and industrial! More appropriate may be abri véloist (pertaining to a bike shed). Jim's Loire would welcome suggestions for the correct term.
Posted by Jim's Loire at 18:29