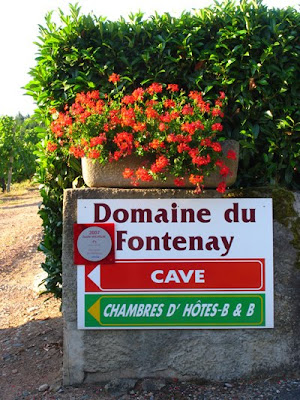 I first met Simon and tasted his wines at the annual Salon des Vins in Angers sometime in the middle 1990s. Then, a year or so later, made a brief visit to the domaine in Villemontais when I was starting some research for a Loire book project that never came off. So it was good to return to see how things have developed and to spend three nights in their excellent chambres d'hôtes.

After my visit to Robert Sérol, Simon and I went off to have a look at some of his vineyards, starting with the vines at Saint-Sulpice, which are planted on a granite bedrock and are apparently the only ones in the Côte Roannaise AC that are in sight of the Loire. Saint-Sulpice is the birthplace of vine-growing in the region with the first vines in the Côte Roannaise being planted here in 966AD. 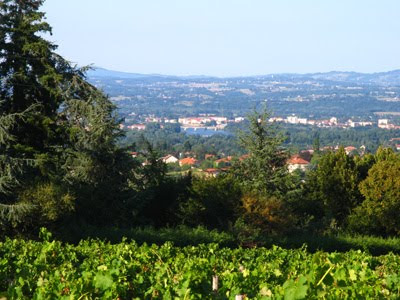 Fontenay's vines@Saint-Sulpice with a glimpse of the Loire
Simon went to university in 1978 on a language course that entailed spending two years in the UK and two years in France at Reims. Simon first came to the Côte Roannaise ara in the 1980s, as the export manager for DMC, at the time the world's largest coloured weaver. It specialised in the Vichy design. Roanne was chosen for the factory because of the soft water from the granite hills, which ensured that the colours were true. Simon's time with DMC included two years living in the States. In time all the travelling doubtless palled and the idea of growing grapes and making wine became more enticing. Simon: "Decanter was my bedtime reading and I found wine-making fascinating. It was 1987/88 when we took over Domaine du Fontenay. We now have 11-12 hectares of vines." 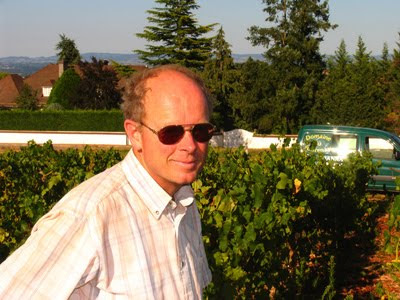 Simon in Saint-Sulpice vineyard
The vineyard at Saint-Sulpice shows Simon's wish to diversify away from Gamay. The parcel at the top of the vineyard is Gamay but two of the lower blocks are planted with Viognier and Chardonnay. This year will be the first vintage for the Chardonnay, while the first Viognier were picked last year at the end of October. Simon got the Viognier cuttings from Yves Cuilleron, one of the leading producers in Condrieu.

"I like to get the Viognier as ripe as possible – 13%-13.5% potential. I expect this year we will pick the Viognier in late September. Because of the proximity to the Loire, there are often early morning mists here and we get noble rot here in the autumn. I like the extra complexity it gives the Viognier. This is accentuated by the lake produced by the Villerest dam." 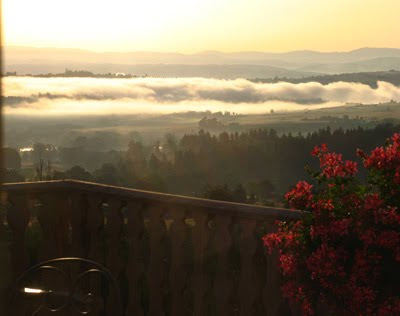 13 August 2009: layer of mist over the Loire as seen from the Domaine du Fontenay
During our stay in mid-August there was mist down in the valley on a couple of mornings, so you could easily imagine that there would be frequent mists in the autumn – ideal conditions for noble rot. The Villerest dam was completed in 1984.

Simon: "There were a lot of protests against the dam. It was sold on the idea that a dam would attract a lot of tourists for water sports, etc. That hasn't really happened. The real reason for building the dam was to ensure that there would be water for nuclear power stations like Chinon. In France what the nuclear industry wants – it gets.

"We have a dry micro-climate here in a rain shadow caused by the hills with an average rainfall of between 600-700 mm a year. The vines here are high trained – giving plenty of leaf surface. My average yield is 45-50 hl/ha, although the quantity of leaf cover would support up to 80 hl/ha."

We then head off to see the vineyard that Simon says "almost made us celebrities!". Apparently it was the first vineyard in the world to be planted with the aid of a GPS system, which provoked media coverage in various parts of the world.

Back at Simon's winery we taste the 2008 Viognier from barrel – it seems promising although it is still in the middle of its malo. Next onto the bottled wines. Starting with the rosé Quoi de Neuf? Simon is keen to keep alcohol levels low and hasn't chaptalised (add sugar) any of his wines since 2001. This rosé is just 9% alc – it is decidedly crisp, lemony and refreshing or bracing depending upon your point of view. Definitely a hot summer's day rosé – served on a cold winter's day in a Northern location, Quoi de Neuf? would just be too lean and austere. 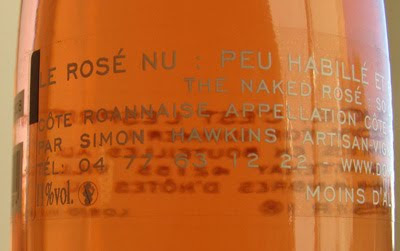 2008 Rosé Nu
The Rosé Nu 2008 is more appealing – still crisp but with greater depth of flavour, red fruits, and mouthfeel. Still definitely a summertime rosé (as Eddie would have said). The third rosé was the sec-tendre 2008 Cuvée Tenderesse with 15g of residual sugar. Very pale colour, like a vin gris, with attractive red fruits and grenadine flavours. One for people who like a sweeter style rosé.

As we moved onto the reds Simon talked about the mobile bottling companies and having to fend off their offers of adding a little extra to the wine. In particular gum arabic is apparently a favourite – not only does it round off green tannins but it also gives the wine greater weight and mouthfeel. Helps to make the case for putting all the ingredients on a wine label. Simon explained that he now uses Bordeaux bottles as it gives more scope for the labels, although probably raises some local eyebrows. The youthful 2008 Gamay 'Sine Nomine' is attractively spicy with pure red and black fruit flavours as well as a herbal, edgy character in the finish. I preferred the 2008 Vigne de Saint-Sulpice with its more generous black fruit flavours, spice and purity of fruit.

2008 Gamay 'Sine Nomine', Côte Roannaise
We finished with two from 2007 – "about the worst harvest I can remember" according to Simon – 2007 L'Authentique (typically Gamay but somewhat green and rustic) and La Reserve du Chanoine (some barrel spice, quite soft mid-palate but with touches of herbal, greenness in the finish). 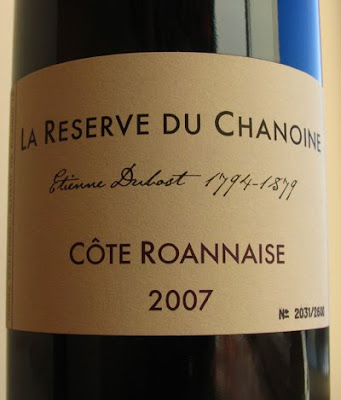 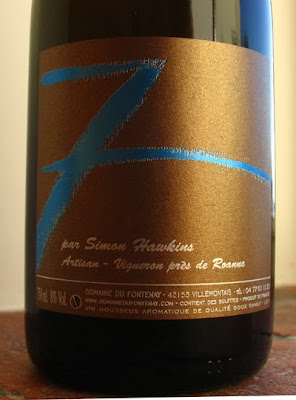 Later I taste the sparkling Le 7, named after the famous old Route National 7 that used to be one of the traditional roads from Paris to the Mediterranean. A pétillant naturelle and sec-tendre/demi-sec in style with strawberry fruit but a lightness as well. Certainly a commercial fizz particularly for those who want a softer, sweeter style of sparkler.

Domaine du Fontenay's wines have good purity of fruit, the reds tend towards a herbal style probably due to Simon's desire to avoid high alcohol. The diverse range shows his willingness to think outside the traditional 'box', doubtless made easier because he is an outsider.