Immaculately dressed Pascal Potaire (Panana hat) in his vines
Jim's Loire is delighted to announce that Pascal Potaire is the runaway winner of the much coveted Le Prix de l'Élégance awarded to the most nattily attired vendangeur in the Cher Valley. Pascal is pictured here yesterday dressed in spotless cream T–shirt and white Panana hat picking in his vineyard at La Tesnière, Pouillé. He and his team were picking Gamay destined for his popular Pet Nat Rosé. The parcel had unfortunately been hit by hail and the crop further reduced by hungry deer and Pascal is carefully trimming a bunch of grapes. 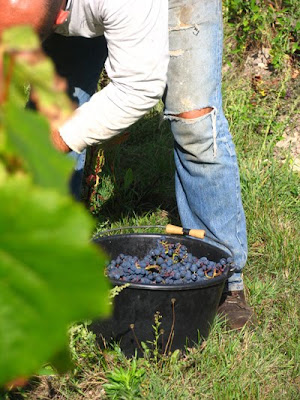 Laurent Saillard: another competitor, opted for the ripped jeans look

Like Beatrice and Michel Augé (Les Maisons Brulées), a fellow producer of natural wines, Pascal uses a horse to collect the small boxes they use for picking. Small boxes are used so as to keep the grapes as intact as possible. At the end of the picking session the loaded grapes will be taken to be pressed at the winery of Mikael Bouges, Pascal's neighbour in Faverolles-sur-Cher. 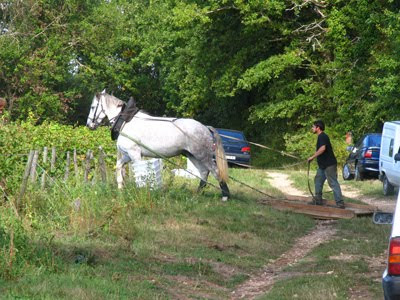 The full boxes are loaded onto a simple sledge 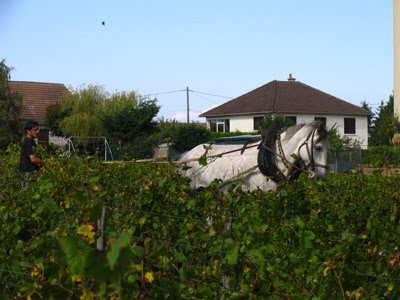 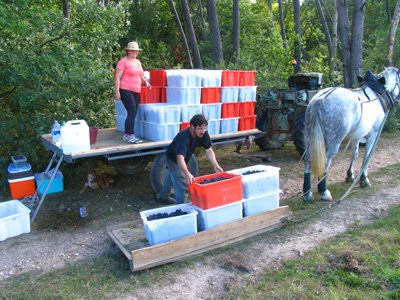 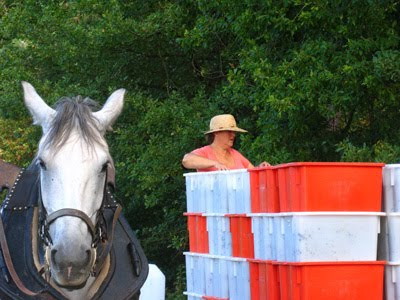 Madame opted for a straw hat

More photos and reports to come – off to Reuilly and Quincy today.
Posted by Jim's Loire at 07:00

Hi Jim,
I finally had a chance to catch up with your fantastic blog. I noticed the picture caption 'acid rot'. I must admit I wasn't too familiar with this at all so I looked it up and came across this concise explanation: http://www.grapes.msu.edu/sourrot.htm
Perhaps other blog followers will find it handy...

Many thanks George. Yes a helpful explanation.