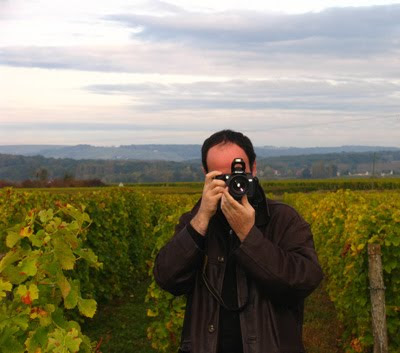 Benoît Roumet in the vineyards of Pouilly: October 2008
Had a quick Skype chat with Benoît, director of the Bureau Interprofessionnel des Vins du Centre, about how things were looking for the 2009 vintage. Benoît was optimistic. They have had a little rain this week that has freshened everything up – reinvigorated the leaves etc. "With the storms around Menetou and Sancerre, it has been drier further west in Reuilly and Quincy."

He expects Quincy and Reuilly to start in the coming week probably in the latter part.

Benoît: "Sancerre and Pouilly will probably start around 2oth September and continue for at least three weeks. I expect that the harvest in the Central Vineyards will be quite drawn out this year as there are big variations in maturity, especially where there has been hail damage. Those vineyards hit by the storms in May before the flowering are likely to be well in advance, while those hit by the hail in the storm of 16th July will be behind.

"Where there is a lot of damage I expect producers will pick by hand. It is not worth getting the picking machine out for one bunch per vine! Also grape maturity it likely to vary within the same vine, so they will really need to hand pick. Producers will need to be vigilant because I fancy, the grapes may suddenly ripen very quickly.

"The forecast is for 10 days of good weather, so for the moment it is looking good."

••
Mark Robertson: Clos Chossay, Epeigné-les-Bois
I spoke to Mark yesterday: "We've had about 10 mm of rain in the last couple of days. My Sauvignon Blanc varies between 8˚-11 ˚potential, although the acidity is low. We may well pick it around 15th and 16th September, while for the Côt, which is looking good, will be during the first week of September."

Because Mark's production is for their own consumption and isn't sold, he doesn't have to wait for the appearance of Le Ban des Vendanges, the official notification for the start of picking. The Ban may well have made sense 50 or 60 years ago but these days is just outmoded pantomime. The idea that you need to get an official derogation to pick early is ludicrous and an example of the type of control that the French wine industry no longer needs.