Have now received the magisterial formbook on the five remaining Bunchers from King Rhône and odds on who might be selected for the sixth plinth in the Bunch firmament. 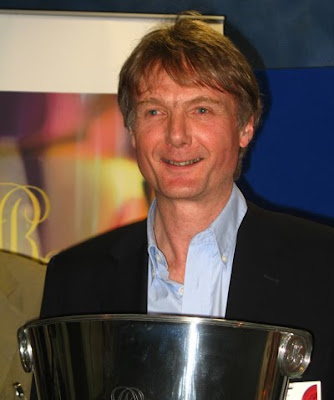 John@the 2008 Roederer Awards: winner of the book prize for The Wines of the Northern Rhône
Yapp: good recent form, have youth on their side, adaptable to many tracks given rolling home terrain, handy sorts therefore. Will be able to bob and weave in a crowded field. Stricter feeding regime of late, plus getting more work into younger servants. Rely on best European bloodlines above all, have some fine old stagers in the stable who have loyal fans given to writing letters to Racing Post when they win races at 13 years old plus.

Corney & Barrow: high class stable, air con for all inmates, and have studbook students in raptures about outcross with prime British bloodstock. Only used to Grade 1 tracks could be a drawback if going gets churned up, and obliged to race at inferior venues. Flashy Ascot form. Runners often well backed, subject to local gossip.

Berry Bros: long, traditional pedigree, with stables visited for their historic connections. Well run, but have dropped old custom of weighing inmates pre and post race. Good reading of formbook has allowed them to place challengers precisely and win a broader range of races in recent years. Hold their form well. Newish travelling head lad unusually large and tall for the job, but has expertise. Chief trainer likes to dabble, feared by the bookmakers when he enters the ring.

Adnams: mixed purpose stable, curious mix of flat and jumping pedigree, with foreign blood introduced at an early, daring stage. Very happy to pot hunt in off the beaten track provincial venues with no PMU, and have good record in that area. Always capable of readying one for a 33/1 scoop, especially given tucked away location. Happily have not yet been accused of running ringers.

JLL's odds on possible runners for the 6th plinth

Lea & Sandeman 11/10
The subject of racecourse gossip recently, rumoured to have been working well on the River side circuit. Challengers usually well turned out. Recent wagers may speak for them.

Noel Young 7/2
Based near Headquarters, and has made strong, steady progress in recent times, still not fully exposed.

Great Western 11/2
Large stable, able to churn out winners on the West Country circuit. Plenty of runners around the country.

Handford 17/2
Wide spread of challengers in this crafty well-located stable. Have to take string out early to avoid excess road traffic. Good open days attract the public to the stable as well. May delay their challenge for the 6th plinth until the 7th has been built.

D Byrne 9/1
Long-standing stable with grass roots methods that have been successful for many years. Below the radar on southern circuit, rare challengers at Goodwood etc, but pack in winners at Haydock, Cartmel etc.

Previous report on the http://jimsloire.blogspot.com/2009/09/bunch-once-there-were-eight-now-there.html.

Email ThisBlogThis!Share to TwitterShare to FacebookShare to Pinterest
Labels: JohnLivingstone-Learmonth, The Bunch

Love it, as a racing nut as well as wine lover/seller (10+yrs @ C&B) I think it's brilliant

Will Thank you for your message. I have to agree JLL's formbook is brilliant. Looking forward to receiving the odds from the Master.

Thanks Charles – a fine piece of work from JLL.