28 January 2009
Last evening I had a couple of Sauvignon Blancs to try: the 2008 Le Petiot, AC Touraine Sauvignon from Domaine Ricard and the 2007 Pouilly-Fumé from Jonathan Pabiot.

I have been tasting Vincent’s wines for five or six years, I guess, and rate him as one of the best producers of Sauvignon Blanc in the Cher Valley. Of Vincent’s 17 hectares of vines, 12.5 ha are Sauvignon Blanc. Le Petiot is the ‘entry level’ SB and makes up the bulk of his production. Vincent makes several other Sauvignons of increasing richness up to late harvest when the conditions permit. 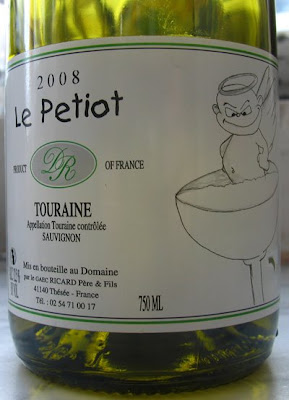 On the other hand Jonathan Pabiot is a new name to me. Jonathan, that is, not Pabiot, which is a popular surname in Pouilly – there are 12 Pabiots listed in Les Pages Blanches (French telephone directory). At least six of these are vignerons. Jonathan appears to be the son of Denis Pabiot in Les Loges, wine hamlet just to the north of Pouilly-sur-Loire, with just two hectares of vines. 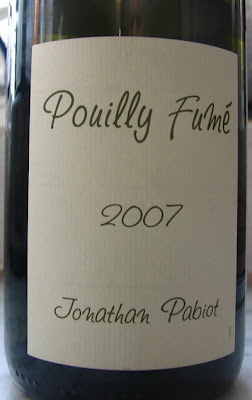 As they are different vintages I guess it is slightly unfair to compare the two wines but I going to anyway. I assume that the 2008 Le Petiot has only recently been bottled but isn’t suffering from the shock of bottling as it has really vibrant gooseberry aromas with a hint of grapefruit too. It’s nicely balanced with some weight and an attractive delicacy in the finish. I suspect with more time in bottle it will take on additional weight.

Jonathan’s Pouilly-Fumé is fractionally deeper in colour than the light lemony hue of the Touraine and the aromas more restrained – more mellow. It has a flinty, mineral character but without the length of Vincent’s Touraine and rather more marked acidity.

Leaving price aside I prefer Vincent’s Touraine. Once, however, you factor in the price there is no competition – £7.95 for the Ricard and £11.50 for the Pabiot. Both are available from Smart Wines of Ascot (01344-621437). Domaine Ricard is also available through HG Wines Ltd.

Both wines have good labels – Vincent's more fun, while Jonathan's is more classic with a modern touch.
Posted by Jim's Loire at 19:47

Jonathan is the son of Didier Pabiot also in the town of Les Loges. He makes a much smaller portion of wine than his father though they share the same facility and vineyard parcels. I tasted with them in February and was quite impressed with their work.

Many thanks for the clarification.