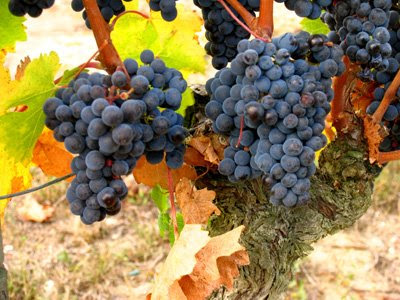 Cabernet Franc@Château de Villeneuve October 2005
New research shows that Cabernet Franc is not only one of the parents of Cabernet Sauvignon, it is also a parent of both Merlot and Carmenère. A group of French scientists working on grape DNA, in collaboration with Professor Carole Meredith, who was at UC Davis until she retired, have revealed that Merlot is a natural off-spring of Cabernet Franc and a previously unknown red grape named Magdeleine Noire des Charentes. Cabernet Franc teamed up with Sauvignon Blanc to produce Cabernet Sauvignon.

Further research by the group shows that Carmenère was parented by Cabernet Franc and a variety called Gros Cabernet, while the parents of the Loire’s Côt (known elsewhere as Malbec or Auxerrois, especially in Cahors) are Magdeleine Noire des Charentes again and Prunelard. The Black Magdeline was also a parent of the unknown grape Mourtès this time pairing up with another forgotten variety called Penouille. Côt@Domaine Joël Delaunay September 2008
The research was published in the Australian Journal of Grape and Wine Research on 22nd December 2008. The parental link between Carmenère and Merlot suggests a logic to the Chileans confusing Carmenère with Merlot.

Clearly fidelity and monogamy are not the norm in the grape world.


Here is the abstract for the article:

Background and aims: Based on parentage analysis of a large nuclear simple sequence repeat (SSR) marker database of grapevine genotypes, we propose the pedigree of several cultivars from southwestern France including Merlot, one of the world's major black winegrapes.

Methods and results: The putative mother of Merlot, deduced from inheritance at 55 nuclear and three chloroplast microsatellite loci, is a non-referenced and previously unknown cultivar, first sampled some years ago in northern Brittany where vines were cultivated at the end of the Middle Ages, and then identified in four places in Charentes. Considering both the name used by the growers of this grape and the literature, we have named it Magdeleine Noire des Charentes. The putative father of Merlot is Cabernet Franc, already involved in the parentage of Cabernet-Sauvignon. Further analysis of genetic relationships leads us to propose the kinship group of Merlot composed, among others, of Carmenère (Gros Cabernet × Cabernet Franc), Merlot Blanc (Merlot × Folle Blanche), Cot (Magdeleine Noire des Charentes × Prunelard) and Mourtès (Magdeleine Noire des Charentes × Penouille).

Conclusions: These results shed new light on the origin of Merlot and on the relationships among several cultivars from south western France.

Significance of the study: Our discovery of the key genetic role of a previously unknown cultivar in the origins of some significant cultivars reinforces the importance of deep exploration, before it is too late, to discover original genotypes which have not yet been collected or referenced.