Loire Valley 2008 harvest report: The Golden Harvest’
To summarise this remarkable harvest, 2008 is just like 2007, only with both more and less of it! In fact we did think of calling this the ‘Grand Petit Millésime’... 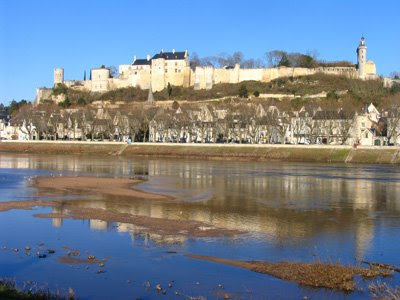 The Sydneys are based in Chinon
Less, obviously, as a result of a dramatic spring frost in the Muscadet that cut yields by half – sometimes by much more – and of devastating summer hail that swept across swathes of Pouilly Fumé and the more unfortunate villages in Sancerre. But even vineyards that escaped these two scourges suffered from reduced yields, leaving the Loire as a whole 25% - 30% down on a normal year’s harvest.

More, though, because quite frankly 2008 is a bigger, better vintage than 2007 (as always, I’m talking about wines from those growers with the courage to gamble with the weather and wait for maturity), with wines that have more concentration of fruit and bigger breadth of structure.

In Muscadet, despite the tiny harvest, quality is high, although some growers (not ours!) were in such a hurry to harvest after the constant rain of end August and early September that their wines show signs of rot and the high acidity of unripe grapes. The better growers picked any parcelles that had started to show signs of rot, then waited – and were rewarded (as was the whole region) with fine sunny and cool weather right through September and October, allowing them to pick at a ripeness and acidity at least on a par with 2007. 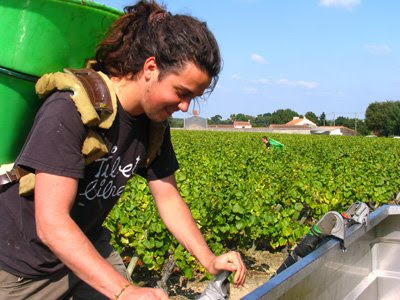 For the dreadful summer had one big advantage here in the Loire – it slowed the maturity of the grapes to such an extent that when the sun did come out in the 2nd week of September, we still had those essential 3 weeks left before harvest.... Leading to harvesting in the glorious autumnal colours that have given the vintage its name of ‘The Golden Harvest’.

The Sauvignons of the Touraine, the southern Loire, of Sancerre and Pouilly are excellent - more precise, more aromatic and more concentrated than 2007, with comparable acidities. Again, better growers are comparing this to 1996 and 2002, but beware all the same – there were problems of mildew and therefore of a lack of maturity with growers unwilling or incapable of treating the vines properly. Interestingly, the best wines seem to come from growers who were happy to stop and start picking as and when each parcelle ripened – and it was notable that Pinard, Bourgeois and Dagueneau (where Didier’s son Benjamin looks to equal his father in his search for quality) were among the first to start picking and the last to finish!

Here in the middle of the Loire, the reds are altogether bigger wines than last year and the best Chinons, Bourgueils and Saumur-Champignys attained fine phenolic maturity, giving deep colour, pulpy ripe fruit and structure. The Malbecs of the Touraine and the Pinots of Sancerre and the central vineyards are also showing promise.

The only exception to this rule is with the Chenins, where the early promise of a truly great sweet wine vintage (you may have seen the photos of passerillage and the start of botrytis I sent out) was wrecked by a month’s rain that started end October just as the grapes were really starting to concentrate – giving some of the lowest degrees in 10 years! That said, and more importantly, the dry barrel-fermented Chenins of Anjou and Saumur have more fruit and purity even than the excellent 07s. And Jacky Blot, our star in the Touraine, rates 2008 as a great vintage for the dry Chenins of Vouvray and Montlouis.

Finally, whatever happens to prices in the UK, this is not the growers’ fault. The vast majority of our producers have again held prices and any increases are due to the combination of a voluntarily low £ to euro exchange rate and to iniquitous increases in duty that make for 44% tax on a £4.99 bottle – and just 16% on a bottle worth £49.99!

Whatever - it’s a good vintage.

Comments and caveats
Although it is tempting to bracket 2007 and 2008 together as both were saved by good weather in September and October, there are significant differences. Rainfall during the summer was generally much lower in 2008 than 2007. It was a ‘dreadful summer’ in Touraine because of it was cool and overcast. Frédéric Mabileau (Saint-Nicolas-de-Bourgueil) reported in August that the dry weather was holding back the veraison.

The 2008 temperatures in September and October were lower than those in 2007. With the cool temperatures during the summer this led to a long, slow ripening for the grapes. One crucial factor in the success of wines from 2008 will be the acidity level and, as Charles and Philippa note, those who waited for ripeness and for the acidity levels to drop, should have made good wine. Additionally for the reds a long maceration may have not been a good idea as the grapes had little juice and a high tannin potential.

Although it is disappointing that the weather at the end of October made it difficult to fulfill the potential promise of the sweet wines, commercially it may not be too bad as it continues to be difficult to sell sweet wines and it is much more important to have a good dry white vintage.