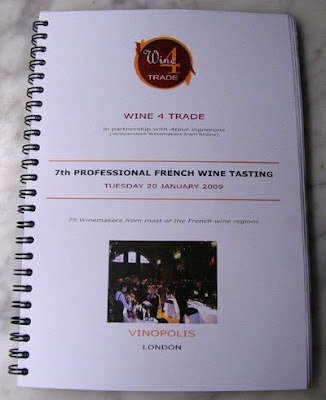 I dropped in yesterday to Vinopolis for this annual event featuring some 75 independent wine producers from around France. Although the event was advertised to finish at 5.30 even at 4.30 when I arrived a number of the producers had already left. I was later arriving than I had intended, so it was a bit of a rush and naturally concentrated on Loire producers. Although I did manage to taste wines from a good number of them I didn’t manage to get to all of them.

Sadly there was little here to get excited about – certainly nothing sensational.

Probably the best wine was a 2007 Coteaux du Giennois (Sauvignon Blanc) from Domaine Langlois Père et Fils, run since 1996 by Catherine and Michel Langlois, which had attractive grapefruit character, some weight and good length. Their 2008 version – gooseberry and grapefruit – looks promising and will be bottled in February. The Langlois white’s showed better than their reds, which helps to confirm the disappointment I felt at the poor showing of Coteaux du Giennois reds at the tasting of Central Vineyard reds I did in Sancerre on 19th December 2008. Putting the light bodied 2007 Le Champ Galant (90% PN, 10% Gamay) in barrique for a year doesn’t strike me as a good idea and has imparted some harsh wood flavours to the finish. However, their 2005 was certainly the best of the Giennois I tasted in Sancerre.

A couple of other wines to mention – a 2008 Touraine Sauvignon and a 2007 Pinot Gris from Reuilly.

The 2008 Touraine Sauvignon from Domaine Le Haut Chesneau of Thesée in the Cher Valley is from old vines and a yield of 45 hl/ha per hectare looks promising with good concentration. Currently on its lees it will be bottled in May. Owners Jean-Marc and Béatrice Villemaine have 23 ha of vines with 10 planted with Sauvignon Blanc. Jean-Marc told me that they had been lucky in 2008 harvesting with their normal yields of around 60 hl/ha. Apparently the frost that hit Muscadet on 7th April also affected parts of the Cher Valley even though the young buds were still in their cotton bud stage then. Initially it had been assumed that they had escaped with damage only becoming apparent later.

Unfortunately the Villemaines’ other wines are less impressive, especially the reds. The difference being, I suspect a question of higher yields. Take the 2007 Gamay, which is dilute. This is hardly surprising given yields of 60-62 hl/ha. This Gamay’s limitations were all too clearly revealed by the 2006 Gamay from the Clos Roche Blanche, just across the Cher Valley from Thesée, that we drank over dinner last night. Admittedly 2006 is a different vintage but this has fruit, texture and concentration. Why? Because of significantly lower yields. 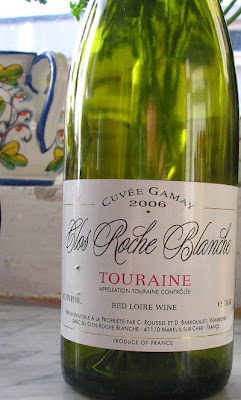 This is a pity as these wines are well made and a reduction in yields, would soon reap rewards qualitatively. I suspect that bringing the Gamay down to around 50 hl/ha would make a significant difference. However unfortunately the increase in quality might well not allow the Villemaine’s to charge a little more for their wines. This is one of the problems of the Cher Valley and, indeed, many other parts of the Loire – it is often possible to make a better living from making dilute wines from high yields than making high quality wines from low yields. Although in Sancerre and Pouilly people are prepared to pay a decent premium for high quality, the same is not true in a number of other Loire appellations, so quality is not rewarded and the quest for quality brings the penalty of a lower income. Of course, there may come a time when the market no longer wants dilute wines. Indeed it is difficult to see that dilute Touraine Gamays can have much appeal in the UK

The 2007 Reuilly Rosé, made from Pinot Gris, came from Domaine Jacques Vincent. Of their nine hectares, 4.5 are planted with Reuilly’s traditional variety – Pinot Gris. The naturally pale coloured 2007 is lightly spicy with good mouth filling ripe fruit and good length – a delicious and charming rosé. Unfortunately Pinot Gris here is in decline in favour of Sauvignon Blanc and Pinot Noir – just 34 hectares now in Reuilly out of a total of 192 ha in production. The Pinot Gris rosé is Reully’s most individual wine – I hope it continues to be made.

There were a few 2008s on show and these confirmed that high levels of acidity could well be a problem for those who picked too early. A few shares in Rennies might be a wise investment.

You can't go wrong with a good bottle of French wine but it's better to drink moderately.