Alice Feiring: The Battle for Wine and Love 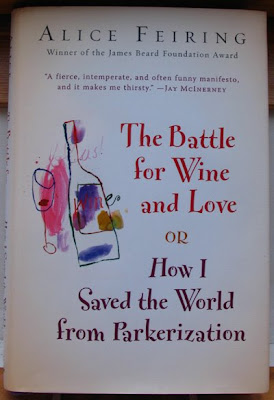 Alice’s book is certainly a good read: having been given it on 30th December I finished it yesterday. It is good to read a wine book that has passionate beliefs, even if I don’t fully agree with her. It is also typical that this book was published in the US. The UK, that once had a flourishing wine book publishing scene, now sticks only to the tried and tested. Only self-publishing efforts such as Charles Metcalfe and Katherine McWhirter’s excellent The Wine and Food Lover's Guide to Portugal lighten up the depressing situation, which is likely to get even worse during 2009.

But enough rant and back to Alice. She is a keen supporter of natural and traditionally made wines and a horror of wines made by ‘spoofulation’ – from chemically ravaged vineyards, made using cultured yeasts, enzymes and aged in heavily toasted, new barriques. She believes that wine has become standardised and lays a lot of the blame at the door of Robert Parker. Hence the book’s alternative title: How I saved the world from Parkerisation.

I have a number of points of agreement with Alice. She likes to get out to the vineyards, meet the producers and hear their stories. I suspect she would be as staggered as I was by a significant UK wine journalist declaring recently that he hated visiting vineyards. Not for her the wine critic approach, adopted by Robert Parker and Malcolm Gluck, that concentrates on assessing bottles of wine and almost views visits to wine regions as a distraction. Alice has no time for marks – especially the 100-point scale. She is also a great fan of the Loire – ‘the land that Robert Parker forgot to review’.

'That was when it hit me that Parker's history of ignoring the Loire had been its salvation. Because Parker dismissed the red wines of the area, the Loire vineyards remained relatively cheap. It remains to be seen whether the Advocate's new appreciation for Loire reds will have any effect on the region or the wines' mass appeal.' This may well be partly true as it is possible had Parker championed Loire reds then prices of the most favoured sites in Saumur, Chinon, Bourgueil and Saint-Nicolas-de-Bourgueil might have risen. But it is highly unlikley that even Parker's most enthusiastic championing would have affected vineyard prices throughout the Loire. In any case prices vary very considerably from one part of the Loire to another: a hectare of Muscadet will not cost the same as a hectare of Sancerre.

Robert Parker has not been alone in ignoring the Loire. Few UK wine journalists and writers have bothered recently to attend the annual Salon des Vins de Loire and few are regular visitors to the region. However, the Loire does now appear to be coming back into fashion. If this is the case, it coincides with one of the smallest vintages for years – in places even smaller than 1991.

One of the funniest parts of the book is in her phone interview with Robert Parker when Robert denies that he has a ‘thin skin’. “I mean, I never commented on that woman’s book [Elin McCoy’s Parker biography, The Emperor of Wine], but the really annoying thing – that was totally untrue – she said about me is that I have a thin skin, that I don’t accept criticism, and that I go after wine writers.” One can almost imagine a roar down the phone: thin-skinned – moi!
Alice’s view is too black and white for me – lacking in nuances. Perhaps I prefer to sit on the fence more than she does. Her judgments are too sweeping. Take her rubbishing of the Salon des Vins de Loire and the overall damning of the general standard of Loire wines.

‘After experiencing such lively times at the alternative tasting (Dive Bouteille and Renaissance des Appellations), how could the dull Salon de Loire have a chance with me? At the Salon the T-shirts and tattoos of the day before were traded in for button-down shirts and sportscoats. But much worse than the formality were most of the wines. Just as at the fringe Italian tasting, most of the Dive wines were meritorious – and at the conventional Salon there was no relief. While I can point to maybe forty regional producers who make exquisite wine, there are plenty of truly bad wines made in the Loire. There are many passionless winemakers who overcrop, machine harvest, farm with chemicals, and use lab-made yeast. Unfortunately most of the 740 million gallons of wine produced in the area sucks.’

Certainly there is still poor wine made in the Loire but substantially less than there used to be. Only maybe 40 producers who make exquisite wines? Depends, I guess, on how you define exquisite, Alice, but there are many, many more who work with passion and commitment and whose wines are worth tasting and good to drink.

However, The Battle for Wine and Love is certainly a recommended read.
Posted by Jim's Loire at 12:01