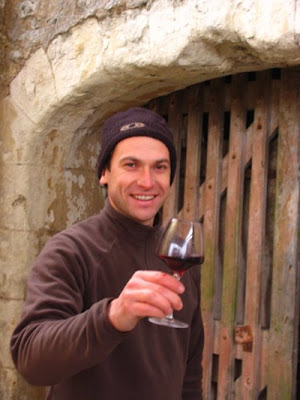 Mikaël Bouges@Les Couilles d'Anes 2006, standing by
an entrance to one of the caves cut into the limestone
This afternoon two good first-time visits to two vignerons – Mikaêl Bouges and Pascal Potaire – who are both based in Faverolles-sur-Cher. Both influenced and inspired by Catherine and Didier of the Clos Roche Blanche and both work organically.

Both are based in the Route de Tours – the old main road up the Cher Valley that passed through Saint-Julien-de-Chédon, Angé, Pouillé, Marueil-sur-Cher etc. This old road has long been superseded by the D976, which bypasses this string of villages that hug the base of the coteaux on the southern side of the Cher. Nowadays the Route de Tours is a no through road with a several imposing houses that face Montrichard.

Mikaël Bouges: “50 years ago there were 25 vignerons along this stretch of road. It was a popular site as it was the main road to Tours. All the way along the road there are small caves cut into the tuffeau (limestone). Most sold their wines on vrac (in bulk) but where Pascal Potaire lives at No 6, the producer used to sell by the bottle.”

Mikaël is at No 20 and it was a decidedly gloomy, overcast, raw cold afternoon when he welcomed me to the premises where he has a small house used as office and storeroom, a yard that has the press and some tanks and a couple of cellars dug out of the tuffeau. 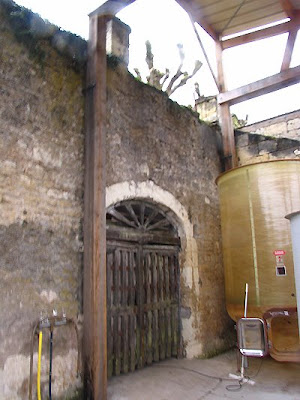 Mikaël's small 'winery' and cellar
From 2000 Mikaël worked with his father, Elie Bouges at the 17-hectare family estate ¬– Domaine de la Puannerie in Saint-Julien-de-Chedon, the neighbouring commune to Faverolles-sur-Cher. Unfortunately when his father retired in 2005, Mikaël didn’t have the capital to buy his father’s share. La Puannerie was sold to Michel Devillers.

Mikaël now has eight hectares – six in Faverolles and two in Saint-Julien-de-Chédon. Half are very young vines and half are vines of between 60 and 80 years old. There are 3 hectares of Sauvignon Blanc, 1.5 ha of Menu Pineau and Chenin Blanc plus 30 ares of Gamay. Menu Pineau is related to Chenin Blanc and Mikaël’s vines are 80 years old. His main interest is in the Menu Pineau, Pineau de la Loire (Chenin Blanc) and Côt. Mikaël’s vines in Faverolles are on the ‘Grand Coteau’ or Le Pente de Chavigny – the south-facing slope that overlooks the small village of Faverolles. He has been working organically since 2002. 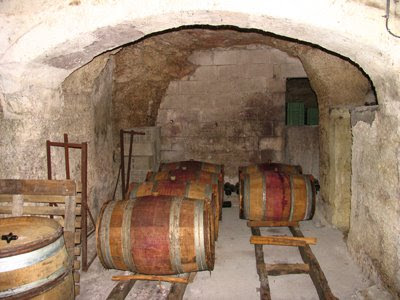 The cellar in the tuffeau
In 2005, his first year on his own, he was able to vinify at Levin, the winery in Bourré owned by David Levin of the Capital Hotel. Sadly Mikaël wasn’t allowed to use these facilities in 2006, so had make alternative arrangements at the last moment.

Mikaël: Unfortunately by the time I had sorted out wine-making facilities at No 20, my Sauvignon Blanc grapes were already too high in sugars – 14.5˚-15˚ to be able to make the very mineral style of Sauvignon that I like to make.”

As is general elsewhere in the Loire, the 2008 harvest here is small.

Mikaël: 25 hl/ha for the Sauvignon Blanc, 17 hl/ha for the Côt, which was hit by mildew and coulure, while the Menu Pineau was affected by vers de la grappe.” (Vers de la grappe is caused by a small butterfly. The use of sexual confusion sachets that emits pheromenes is one way of combating this butterfly.) Also July 2007 was cold and wet when the grape bunches were being formed for the following year.”

Mikaël talked about the different clones of Cabernet Francs. He has some vines that are 70 years old that have small berries, whereas some of the modern clones have large berries that don’t ripen as well. Also about the Menu Pineau, a traditional variety in this area that ripens early, that Mikaël uses for his Pétillant Naturel. Menu Pineau is related to Chenin Blanc but has become quite rare. He also told me about the galets noirs (round black stones) found at Saint-Julien-de-Chédon. Of which more in a minute but first we tasted the deep coloured 2007 Côt Haut with its rich and expressive nose of black fruits and soot and lasting flavour. This comes from a warm vineyard at Faverolles that faces due south and is planted on gravel.

Then onto my favourite and most impressive wine of the tasting – 2006 Les Couilles d’Anes, which again is 100% Côt. This deep, dense coloured wine has lovely rich concentrated fruit and spends a year in barriques. It needs two or three years in bottle to show its best. The name Les Couilles d’Anes (donleys’ balls) links back to the galets noirs and is a play on the stones and the balls of the donleys, that in the days when donkeys were used in the vineyards, would have been in front the vignerons all day. 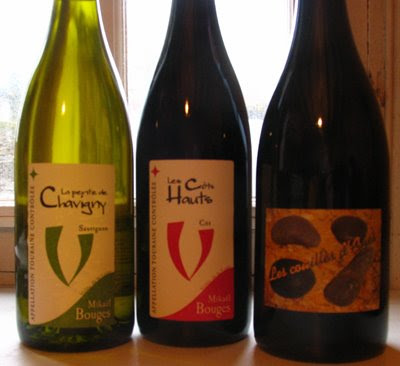 Some of Mikaël's wines: Le Pente de Chavigny, Côt Haut, Les Couilles d’Ânes
To finish we had a look at a still fermenting 2008 Pineau de la Loire, which was picked on 30th October with 15% potential alcohol – all fermenting apple flavours.

Mikaël stressed that although he is makes ‘natural’ wines he is keen to avoid the extremes of the movement, particularly in relation to excessive oxidation. On this showing Mikaël’s wines are certainly worth following. It is seems unfortunate that he was not able to take over the family vineyards, which are commonly handed down from generation to generation, and that instead of his father passing them to Mikaël they were sold. 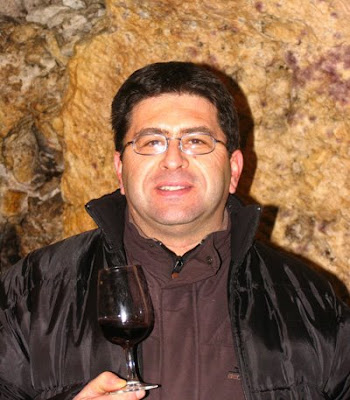 Pascal Potaire in his cave@Angé
After I had finished the tasting at Mikaël it was just a short walk along the road from number 20 to number 6 to meet Pascal, who has five hectares of vines.

Before setting up on his own Pascal worked with Nicolas Renard, both in Jasnières and then while Nicolas was employed by Prince Philippe Poniatowski at the Clos Baudoin in Vouvray. Then in 2002 Pascal worked for a female Japanese wine producer in Thesée. The following year, while still working for her, he acquired vineyards in Pouillé and Angé (both small wine villages on the south side of the Cher Valley to the east of Montrichard). In 2005 Pascal started working entirely for himself. He has been working organically from the start.

Pascal has six varieties planted in his five hectares: a hectare each of Chardonnay and Sauvignon, 1.3 ha of Gamay, 80 areas each of Menu Pineau and Chenin Blanc and, finally, all of 20 ares of Cabernet Franc. His speciality is the increasingly fashionable pétillant naturel.