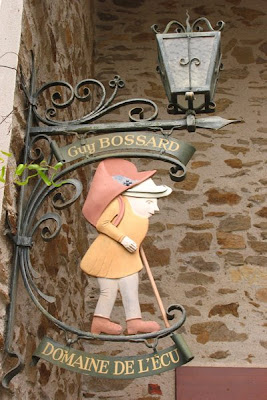 Confirmation this morning that Guy Bossard, one of Muscadet's top quality producers, has put his Domaine de l'Ecu up for sale. Guy is now in his late 50s and with no one from his family to take over has decided that it is time to sell. Two disastrously small harvests in 2007 and 2008 may have contributed to his decision. In 2007 Guy made 9 hl/ha due to mildew, while in 2008 frost reduced his crop to 17 hl/ha.

Domaine de l'Ecu has around 17 ha of vines and Guy was one of the first in the Loire to embrace biodynamics – converting in 1986.
I hope that whoever takes over will work to maintain the high quality of Guy's wine and not trade on his reputation with inferior wine.
Posted by Jim's Loire at 08:45

Sad news, indeed, Jim. I second your hopes for the future of the estate.

Jan-Tore and David: Sad indeed but inevitable if there is no-one to take over. Perhaps Guy will stay on as a consultant.