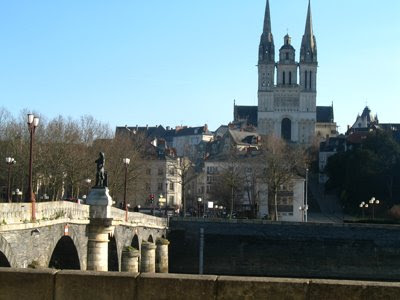 Looking across the Maine to Angers' Cathredal
14th October 2008
Today I received my invitation to the 2009 Renaissance des AOC tasting to be held on 1st February 2009 at the Greniers Saint-Jean in Angers. This is the first rendez-vous of the annual Salon des Vins de Loire. The Salon, itself, runs from the 2nd-4th February – not here in the centre of Angers but on the northern outskirts at the Parc des Expositions. 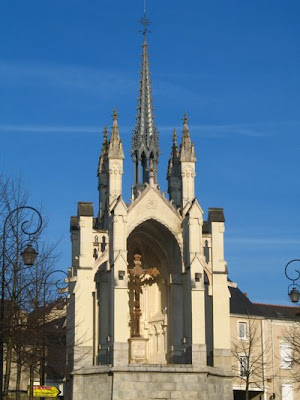 Church near Les Greniers Saint Jean
I understand from an impeccable source that it was intended that the 2009 Renaissance tasting would be a two-day affair – Saturday 31st January and Sunday 1st February. Unfortunately the person deputed to book the Grenier Saint-Jean delayed too long, so that by the time they attempted to book the Grenier was already hired for a wedding. So one day this year. I won’t attempt to embarrass the organiser partly because he is one of the Layon’s most amusing producers as well as making fine dry Anjou Blanc and sweet wines too. Not to mention the best Rosé d’Anjou around – although it has to be said there isn’t much competition for this accolade. I won’t attempt to embarrass him because it is most unlikely to read this as he abhors the internet – regarding it as a toxic assemblage of the work of Beelzebub, Anglo-American imperialism and global capitalism. A mistaken view in my opinion but there you go!

The Renaissance tasting is very much a mixed bag. Amongst its members are some very fine producers but equally there are those who make appalling wines that undermine the credibility of this organisation. I suspect one of the main reasons is the almost messianic belief that any use of sulphur is evil. That producers, like the late Didier Dagueneau and the distinguished Mark Angeli, have felt it necessary to move away from a complete rejection to a very limited use of sulphur indicates that it is sensible to protect the integrity of your wine with a minimal dose. In September 2007 Didier referred wryly to his no sulphur days as “his peace and love era".

Here is a piece I wrote last February, which first appeared on the RSJ Restaurant website:

Sunday 3rd February 2008: Renaissance des AOC, Angers
On a good, crisp but rather chilly morning Tom and I walked from the Hotel du Mail across the Maine to the Greniers St Jean for the Renaissance tasting. The Greniers St Jean is over the other side of the River Maine that flows through Angers before joining the Loire.

The aim of the group ‘Renaissance des AOC’ is to return to wines that reflect their terroir or sense of place by working organically and eschewing chaptalisation, cultured yeasts, fining etc. The aim is to try to make wine naturally as possible. Nicolas Joly of La Coulée de Serrant is one of the leading people in the group. The tasting is split into those who are fully paid up and those who follow the criteria but who are not part of the group. 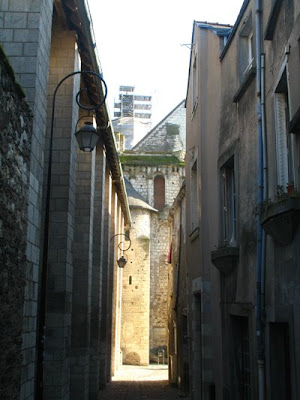 Old street near Les Grenier Saint-Jean
Although there were also producers from other parts of France, Tom and Jim concentrated on those from the Loire. As at last year’s edition quality here was extremely variable. We tasted some extremely good wines from producers like Richard Leroy of Rablay-sur-Layon, who makes wonderful dry white Anjou, and Eric Nicolas of Domaine du Bellivière in Jasnières and Coteaux-du-Loir. Eric has long been an RSJ favourite and his wines are on our list. Other good producers included Thierry Michon, also on the list as well as Françoise and François Plouzeau (Domaine de la Garrelière, AC Touraine) near Richelieu, our old favourite Mark Angeli (Anjou and Bonnezeaux) and Catherine and Philippe Delesvaux (Anjou).

Equally there are some real horrors. Completely oxidised wines are a speciality of some of these producers. Unfortunately they see it as a badge of honour that they should not use sulphur dioxide at all not even in the smallest dose to provide some protection for their wines against spoilage. Many of these wines are sold as vin de table because often they cannot get approval to use the relevant appellation because their wines are faulty and are rejected by the authorities. Often this rejection appears to confirm to these growers that they are right and that having to sell your wine as vin de table is seen as a badge of honour.

I tasted Jean-Christophe Garnier’s wines. He comes from St Lambert and I’m sure he works very seriously in his vineyards – low yields, careful selection of fruit etc, so that when his grapes arrive in the winery they are in good condition. Sadly it is probably here that it all goes wrong. Working without sulphur is possible but the winemaker has to be absolutely meticulous about topping up barrels very regularly to make sure that they are full, so that there is no air to oxidise the wines. Generally you have take great care that everything is as clean as possible. Whatever Garnier does in his winery, he ends up with undrinkable oxidised wines. 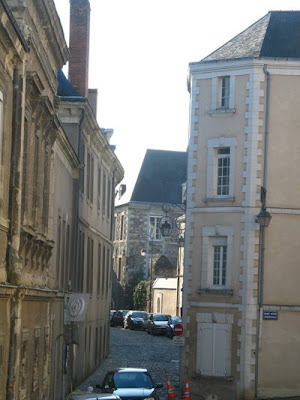 Old street near Les Grenier Saint-Jean
That evening Tom and Jim were joined by Sarah Ahmed, a wine journalist, for dinner at Le Petit Comptoir (02.41.88.81.57), a small but very good restaurant in near our hotel. Sarah runs the wine detective website (www.thewinedetective.co.uk) and is one of regional judges on the Loire for the Decanter World Wine Awards. Dinner with a fixed price four course menu – entrée, fish, meat and dessert at €41 was very good. We started with an enjoyable bottle of Domaine Richou’s Anjou Blanc Chauvigné 2005. This was followed by another of Richard Leroy’s whites – Le Clos des Rouliers 2006 Anjou Blanc, which was quite rich with a little bit of wood on the nose. Rouliers is the cheaper of Richard’s two cuvées but it confirmed the good impression that we already had of his wines. For the red we moved further east to Saumur-Champigny with Patrick Vadé’s Cuvée Lea 2001, which was also showing very well. 2001 tends to be rather overshadowed by 2003 and 2006 but there were some good wines made in this vintage, which are drinking well now. Le Petit Comptoir is highly recommended but it is tiny, so booking is essential.

Great BLOG! Please visit mine below and click some links. THANKS SO MUCH!