Now back in the UK after three weeks in the Loire following the 2008 harvest. There still remain some quick harvest reports to write, which I hope to do this week plus bring reports of the continuing harvest.
Despite a favourable forecast for today in Touraine, the weather sprang a surprise with some rain from around 9.30 am. However, I don’t think it rained very much and is unlikely to be any significant difference to quality. The weather forecast over the next week is generally favourable, with some rain possible in the middle of the week.

On the journey back we left the rain behind around Le Mans and enjoyed a wonderfully sunny day with magnificent autumnal colours in northern France and on the drive back to London. The Channel Tunnel was quiet and we managed to get on a train leaving nearly 90 minutes before our scheduled crossing. 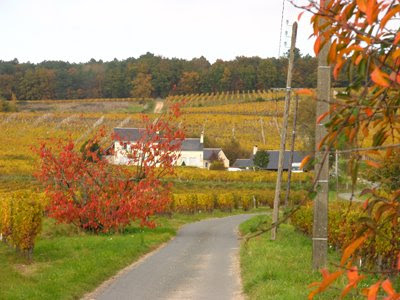 Domaine de la Butte, Bourgueil. Mi Pente is the middle part of
the sloping vineyard above the house and chai.
Inspired by our visit to see the Taile aux Loups harvest in Montlouis, last night we opened a bottle of Jacky Blot’s Mi Pente 2003 Bourgueil, Domaine de la Butte. The 2003 has also shown well and it continues to do so – rich, ripe fruit without being Porty and still with a freshness in the finish that marks this out as a Loire red despite the 2003 heat wave. I'm confident that the 2003 Mi Pente, the top wine from Domaine de la Butte, will last another 10 years at the very least.

Today’s Nouvelle République reports that there has been a change of chef at the one-starred Michelin Château du Pray in Charge just to the east of Amboise. Gérard Dehaye, who has had a varied career including financial communication and who has worked with chefs Michel Guérard, Michel Bras and Didier Oudill, has replaced Ludovic Laurenty. Although it is a while since I have eaten there it has an imposing dining room overlooking the Loire and a good wine list.