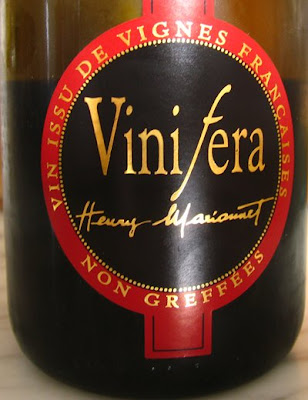 Non greffées = ungrafted
Off to the Barbican Centre (London) last night for the amazine Africa Now concert that featured Baaba Maal, Amadou & Mariam, Bassekou Kouyate, Oumou Sangare, Muntu Valdo, Toumani Diabate, Amy Sacko, Souad Massi, Rachid Taha, Sola Akingbola, Daara J Family and others. After an OK first half, the second set that featured a constantly changing group of musicians chiefly around Toumani Diabate was absolutely stunning – amazing haunting sounds. The concert was supposed to have been sold out but there were a number of empty seats near us.

So where does Henry Marionnet’s Ungrafted Gamay 2007 AC Touraine fit in? Well we grabbed a takeaway doner kebab on the way home and drank Henry Marionnet’s attractively black fruited 2007 Vinifera Gamay, which has considerable depth of flavour and is a real success for 2007, which was not an easy year for Loire reds. It certainly matched the doner kebab. 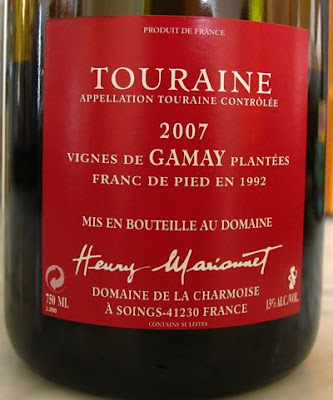 The ungrafted vines were planted in 1992 and, as far, as I know have not yet been attacked by phylloxera. He has around five hectares of ungrafted vines. As well as the Gamay, there is also Côt, Sauvignon Blanc and Chenin. It is fascinating to taste grafted versions of the same grape against the ungrafted ones. I was able to do this in early February 2007 and invariably the Vinifera wines had greater depth of flavour and more character.