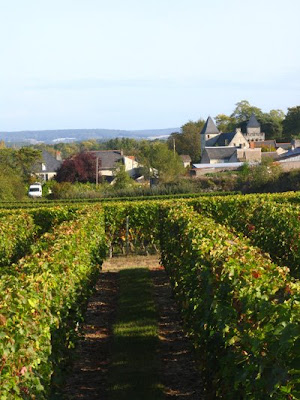 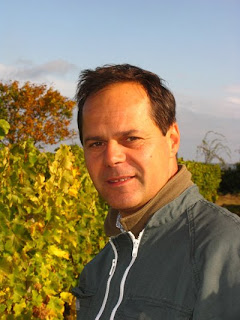 Jean-Pierre Chevallier
Jean Pierre Chevallier, Château de Villeneuve
Caught up with Jean-Pierre in his Les Cormiers vineyard (Chenin Blanc), close to the famous Clos des Murs. He and his pickers were busy doing a selective picking – choosing those bunches affected by noble rot and therefore too rich and powerful in alcohol to go straight into Les Cormiers, his grand vin blanc. They started yesterday afternoon and Jean-Pierre was very surprised that the juice that came out of the press was 18.4% potential. “I can’t make dry wine with that!” he said. “I’ll ferment it separately and may be I’ll make some Coteaux de Saumur again this year – not what I had intended to do.” Château de Villeneuve has made Coteaux de Saumur only twice before – in 1921 and 2003. JP is well satisfied with the quality of the fruit both Chenin and Cabernet. 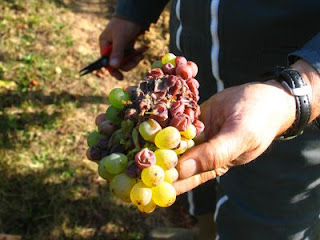 What Jean-Pierre is picking – part of bunch has noble rot 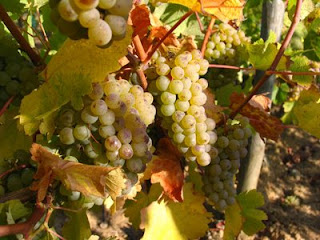 What's being left behind for next week: perfect bunches for le grand vin
“I got a special derogation from the INAO to start picking my Cabernet today as one parcel was already at 13.7% on Monday and the rest is between 12.8%-13.2% but with an acidity of 6.7. I’ll start picking the Cabernet next week.”

Richard Desouche, Château de Chaintres and Petit Domaine
When we arrived Richard, who manages Chaintres, was busy overseeing a batch of Chenin Blanc through the pneumatic press. “We’ve finished picking for the Crémant. There is 10% less juice in the grapes than normal. We need more than 160 kilos of grapes for a 100 litres of juice – the Crémant rules insist on 150 kilos for 100 litres. We’ve also picked the Chenin for the Chaintres still white as well as for my Petit Domaine.” Richard also talked about the need, once they start vinifying the red, to be really careful this year not to extract too much tannin. “We’ll have to be really gentle. Once we start on the Cabernet Franc we’ll have four days of picking left.” Richard is hoping to move Chaintres to organic viticulture. 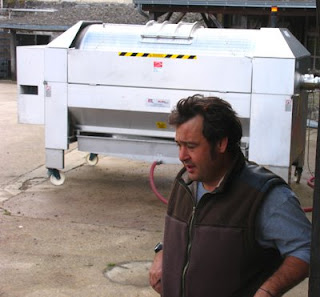 Richard by the press.
We tasted three vintages of Saumur-Champigny from Château de Chaintres – 2005, 2006 and 2007. The first two vintages were made by Krishna Lester, the previous manager. The brooding and concentrated 2005 needs several more years in bottle. The less concentrated 2006 is quite tannic – a touch green in the finish. It will be interesting to see what happens to this in a year or so – will the fruit win through or will the tannins continue to dominate? The 2007 is light in the style of this vintage – “very kirsch” said Richard.

Richard suggested that we went back to Le Pot de Lapin, which we were very happy to do. We started with a refreshing glass of les Bulles de BD, a rosé petillant from Bruno Dubois in Saint-Cyr-en-Bourg. Then the attractively plummy 2005 Domaine de la Cune Saumur Champigny from Jean-Luc and Jean-Albert Mary in Chaintres. This is the straight domaine cuvée, which is drinking well at the moment. Unfortunately the first bottle was corked. This is the first corked wine I have had for a while, although curiously a day later we tried three bottles of a Médoc over dinner at a friends’ house – two of which were corked!

At Le Pot we saw Patrick Vadé of Domaine Saint-Vincent. “We’ve already done a tri for the Crémant. We’ll start picking the Chenin early next week and the Cabernet Franc on Wednesday.” 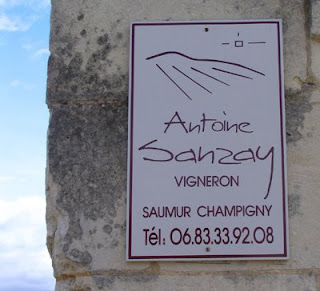 Antoine Sanzay
We called by Antoine's winery in Varrains. Unfortunately there was no sign of Antoine. His Saumur Blanc and Saumur-Champigny are well worth trying as Antoine is one of the most promising young producers in the area.
Antoine Foucault: getting ready for the vintage
Later in the day we dropped in on Antoine at Chacé, who, assisted by his cousin, was busy making final preparations for the start of the harvest of his Chenin Blanc expected early next week depending on the acidity levels. When last checked his young Chenin vines were at 12.2% and the Centenaires at 13.5% with acidity levels around 7. Antoine said that the Foucault brothers, Antoine’s father Charly and uncle Nadi, will probably start in the middle of next week – again depending on what happens to the acidity. 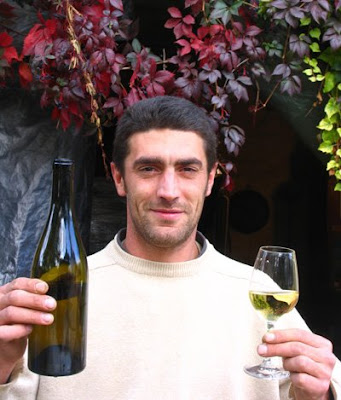 Antoine with his 2006 Domaine du Collier Saumur Blanc
We quickly tasted the Domaine du Collier 2006 Saumur Blanc, which has just been bottled – absolutely delicious (see below) as well as the 2005 La Charpentrie Saumur Blanc from 100 year old vines. This is richer reflecting both the vintage and the age of the vines but still with fine minerality. 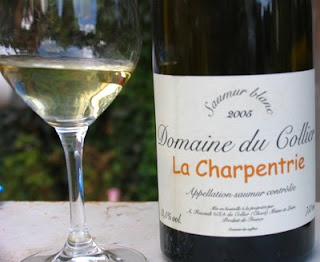 Antoine Foucault’s stock control problem
So delicious is Antoine’s 2006 domaine Saumur Blanc that his father, Charly, can’t keep his hands off this recently bottled wine – a wine with some floral aromas, a hint of butter and toast but overall a wonderful mineral purity and great length of flavour. Although the disappearing stock may be hitting Antoine’s bottom line, it’s also a huge compliment as Charly and his brother, Nadi’s, wines are the benchmark for the region. 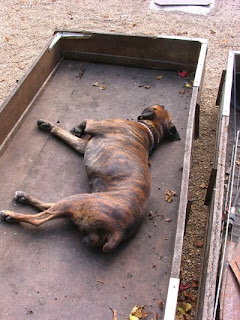 Antoine's dog gets ready for the vintage – snoozing in the little trailer that will take the debris that's left over after being through the press
Régis Neau, Domaine de Nerleux
Our last visit on Friday (3rd) was to see Régis. From having been a glorious morning the sky was now covered and threatening rain. 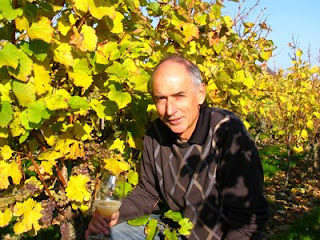 Régis in his vines destined for Coteaux de Saumur:
early November 2007
“I’ve finished picking,” said Régis “We started on the Chardonnay on 19th September, the Chenin on 22nd and the Cabernet on 23rd/24th. We finished on 29th/30th with another parcel of Chenin. We now have 7 hectares, which we use for sparkling wine. As everywhere, the yields are down this year. Normally we have 70 hl/ha – this year it’s 57 hl/ha overall. The Cabernet at 50 hl/ha and the Chenin at 65 hl/ha. We are now waiting for the Chenin and Cabernet for the still wines. For the Cabernet the acidity in the best parcels is now down below 6. At Monsoreau I have some Cabernet that is between 11.2% and 12.2% with acidities between 5.2 and 6.5. The Chenin is a 12% with 7.5 acidity. It’s been very dry – we need a little rain now but not too much!”

I tasted the 2003 Coteau de Saumur from Antoine Sanzay earlier this year and thought it very good. Unfortunately I didn't get a chance to try any other wines, or the time to visit him, but he is certainly on my radar for the future.
I'm really enjoying these reports Jim. This blog is a hugely significant new resource on the Loire. Great images too!