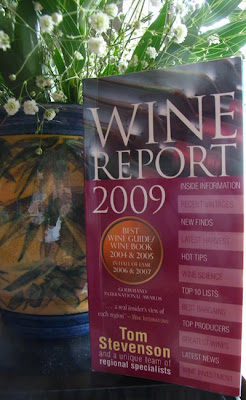 My review copy of Tom Stevenson’s annual Wine Report 2009 (DK: £9.99) arrived on Friday. Naturally I turned immediately to the Loire section written by Charles Sydney, who has lived in the Loire for the last 20 years acting as a courtier en vins – searching out and selling wine to UK retailers.

Charles' opening headlined remark – ‘You’ve heard of Steven Spurrier’s 1972 Judgment of Paris, which pitted top California reds against the greatest clarets’ – sets him out as an man of vision as the famous tasting was actually held in 1976.

I know from comments on Tom Cannavan’s wine-pages that Wine Report is popular and esteemed. However, I have always thought that producing a newsy report in the era of the internet is rather like trying to consume soup with a fork, especially as the deadline is months before the publication date. Inevitably and through no fault of his own Charles’ news is now old. The alliance between Pierre Chainier and Caves de la Loire that created Loire Propriétés ended in January/early February 2008. Grands Chais de France took over Sauvion & Fils and Château du Cléray in November 2007 and the Pays Nantais (Muscadet and the Fiefs Vendeens) joined Interloire on 1st January this year.

Charles’ fatuous, but mercifully brief, rant against biodynamics and organic viticulture in favour of la lutte raisonnée would make even the most ill-informed taxi driver blush.
The most useful section is the 10 most exciting or unusual finds. Among Charles’ selection includes a Pinot Gris VDP from Muscadet producers Bonnet-Huteau, the Touraine Amboise Becarré 2006 from the impressive Damien Delecheneau and a Pinot Noir Blanc (vinified in white) by Alphonse Mellot.