Our last day in Sancerre and the Central Vineyards. Quite heavy rain overnight starting around midnight and continuing for several hours. Rather cloudy this morning. Activity around Sancerre started today from around 6am and now just before 8am there is a continuous drone of machines and the lights of vans and tractors moving around on the still dark hillsides. 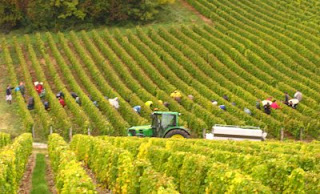 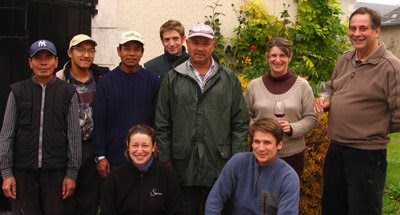 Once again there is surprise and satisfaction from the vignerons that 2008 is turning out remarkably well after the very indifferent summer.

First stop was a quick chat with Vincent Grall (see posting: Vincent Grall: vintage in Sancerre’s streets). Leaving Vincent we headed out to the vineyards just to the south of Sancerre to take pictures of Pinot Noir in the rather damp vineyards. Looking down across at La Moussière we could see a picking team busy in the vines. As I suspected this was an Alphonse Mellot team and, having established that Les Deux Mellots – snr et jnr – were both the winery at Sancerre we headed off to Porte César. As we left the vineyard it was good to see that the old cabane des vignes (stone vineyard cabin) in the vines at La Moussière is being restored. Sadly these stone cabins that were once a regular feature of many of the Loire vineyards are disappearing – abandoned and falling into disrepair. They belong to a time when people walked out to their vines – before the days of tractors and small vans. 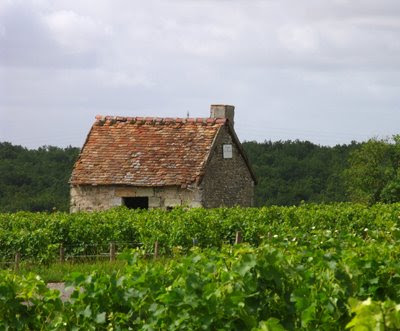 Alphonse Jnr: “We are finishing La Moussière this morning and that will complete Sancerre. This afternoon we start on the Coteaux Charitois (Les Penitents). Because of the hail it’s a tiny harvest – only 12 hl/ha for the classic La Moussière Rouge. Two hectares of La Moussière were completely wiped out by hail. It is better for Generation XIX, Grands Champs and Les Les Demoiselles – 27 hl/ha, which is our normal yield for these wines. But we are happy with the quality.”

Tasting the juice, the colour is already dark. Everything here is picked by hand. 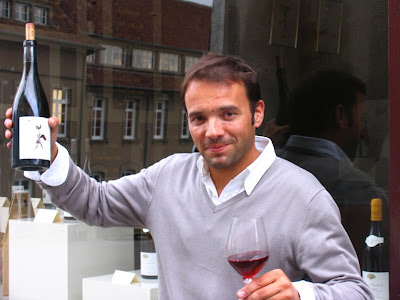 Alphonse introduced me to Antoine Michon, the son of Thierry (Domaine Saint-Nicolas) – the star of Les Fiefs Vendéens. Antoine is doing a stage with the Mellots, so I get him to tell me about the harvest in the Vendée.

Antoine Michon: “We were hit by the frost of 7th April, so it’s a tiny production this year – only 12 hl/ha. We started on 13th September and will finish this week. However, the quality is very good with the Chenin up to 14% potential.”

Roger Champault et fils
(8th October 2008)
Late morning we dropped in on the Champaults in the hamlet of Champtin, which is just a couple of kilometres west of Bué. We saw Claude Champault and his father, Roger. Laurent, the other brother, was out in the vineyards. 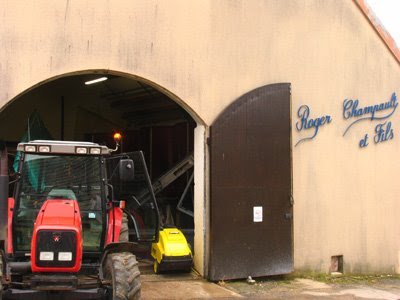 A delivery of grapes – note conveyor


“We started last Thursday,” said Roger, “and there are about three days harvesting left.” While we talked Claude and a couple of workers were trying to fix the belt of the conveyor that takes the grapes into the press. Machines breaking down at vintage time are always a problem. So much of the equipment, like presses and conveyors, needed during the vintage is only used for a maximum of two or three weeks in the year. Only after their long lay-off to be used almost continuously, so breakdowns are inevitable.

Using conveyors means that the fruit is treated much more gently than pumping it in through a pipe. It is very noticeable how much more care now take over the handling of grapes.

Claude had time to let me taste some of the 2008 juice, which was very clean – just as it has been with all the producers visited in Sancerre and Pouilly. “We picked the Pinot Noir in Menetou-Salon yesterday,” said Claude. “We harvest about two hectares a day and I expect that we will finish on Friday. Yields are averaging 60 hl/ha.”

As we left Claude pointed out their shiny new Italian Defranceschi pneumatic press. Just a few more days work before it gets a long rest before the 2009 vintage! 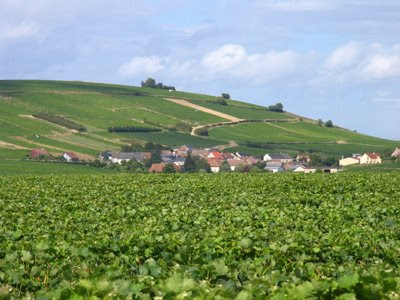 View from south-west towards Champtin and its vineyards


Henry Pellé, Menetou-Salon
Following a memorable few hours spent with the Natter family, we headed off to Morogues to drop in on Anne Pellé and her son, Pierre-Henry, of Henry Pellé. They were in the middle of their harvest.

Pierre-Henry: “We started picking in Menetou on 30th September. We are taking our time waiting for fully ripeness. Our Sauvignon Blanc from Morogues is coming in at 13-13.5% potential. Our yields this year are 40 hl/ha for the Pinot Noir and 45-50 hl/ha for the Sauvignon.“ Anne and Paul-Henry Pellé
From Morogues we cut across country avoiding the speedier route via Bourges and on to the autoroute. It was well worth the extra time – driving mainly through forests with sensational autumn colours. Cutting across country always emphasises the sheer size of France in comparison to the UK. We reached Soings-en-Sologne around 5.30 pm.

Henry Marionnet, Touraine
Henry and his son, Jean-Sébastien, were decidedly relaxed as they had finished their harvest. 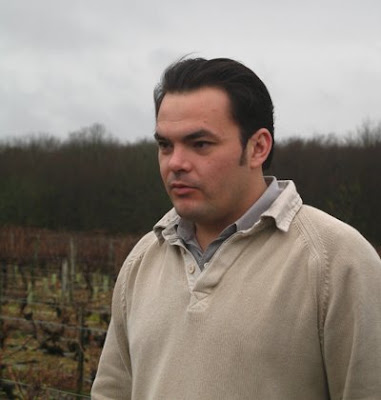 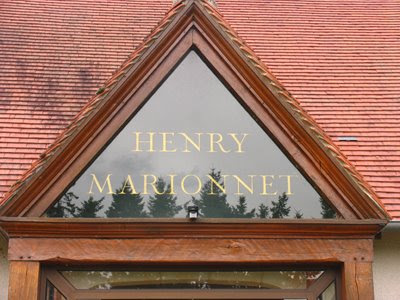 The office at Domaine de Charmoise


Henry: “We started on Wednesday 17th September, finished on Saturday 4th October and harvested quicker than usual. The harvest is small – we were hit by hail on 30th May and the flowering was difficult – the Côt suffered from coulure. Yields for the Sauvignon are between 20-35 hl/ha with the Sauvignon Vinifera at 20 hl/ha. However, the Gamay is at 50-55 hl/ha.

“Although there was a little rot, the quality is very good. After the poor summer, the weather in September 2008 is proof that God exists!”

Henry recalled vintages when nature had destroyed the harvest. “In 1988 we were hit by hail in August, then in 1991 there was the April frost and we only made 2-3 hl/ha.”

Together Henry and I tasted various 2008 juices. The depth of the Gamay’s colour stood out – “similar to 2005 with a pronounced black cherry flavour,” said Henry. The Vinifera Côt was even darker – almost black, while the ungrafted Romorantin planted in 1850 was a floral and peachy. Only 10 hl/ha from 36 ares, the final wine will be fascinating to taste. 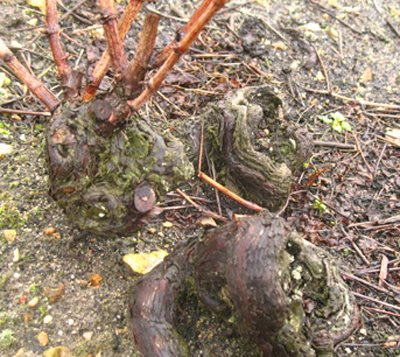 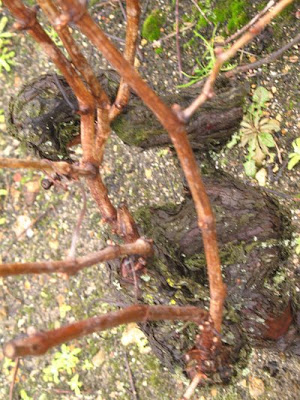 I asked Henry about the Place Alexander Marionnet in the centre of Soings-en-Sologne that showed up on the GPS. Apparently Alexander was a nurseryman. Henry explained that his paternal ancestor was a master carpenter from the Vendée, who arrived in the area 150 years ago and found work here. Curiously this would have been around the time that the famous parcel of Romorantin was planted. Despite being left-wing and his boss right-wing, he married his boss’ daughter. At that time and until the 1960s the Domaine de la Charmoise practised polyculture – the pattern of cultivation found throughout the Loire with very few people concentrating solely on growing vines. Today the Marionnets have 60 hectares of vines.

That evening we opened a bottle of the straight Henry Marionnet’s Touraine Gamay 2007 – deliciously easy drinking with bright red fruits and considerable concentration.