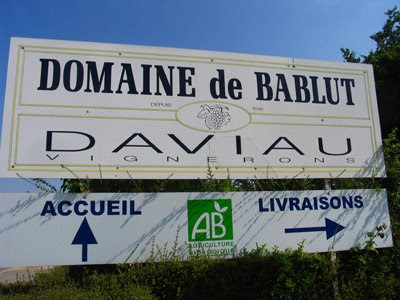 A quick call this evening to Christophe Daviau, Domaine de Bablut, to find out how the vintage is progressing. The Daviau family have been at the Bablut in the market town of Brissac since 1546 – an estate agent’s nightmare! 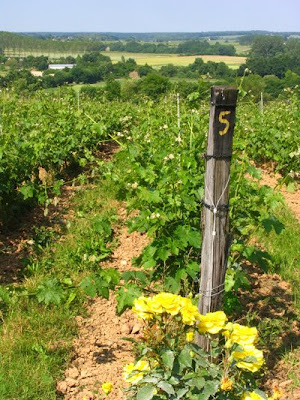 Cabernet Sauvignon vines@Brissac
overlooking the L'Aubance Valley
“There is still not much juice in the grapes. Yields are about two thirds of what I had anticipated – about 25-30 h/ha for the Cabernet Sauvignon.”

“We didn’t pick this morning as there was a little rain but I expect we will start picking the Cabernet Franc tomorrow morning and finish on Friday. We picked the Chenin for the Anjou Blanc on Thursday and Friday of last week. It was a good thing we did as noble rot really developed over Saturday and Sunday. As for the Coteaux de l’Aubance I expect that we will begin on Friday and we’ll pick Monday and Tuesday – the forecast is good until Wednesday. Noble rot is now developing. I might release a little Grandpierre (Christophe’s single vineyard L’Aubance, which has a wonderfully mineral character, but there will be very little as the parcel was frosted.

It’s is a problem getting some of the grapes fully phonologically ripe as most of the leaves have now fallen off – because the vines started to anticipate winter early due to the cool temperatures in August. Also, of course, the vintage is later than in recent years.”