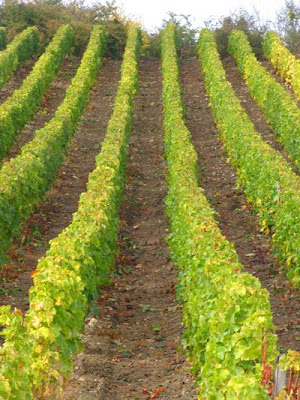 Vines@Montigny (AC Sancerre)
During the harvest it is easy to get carried away with the vignerons' understandable enthusiasm for their newly-born vintage but, as elsewhere in the Loire, in 2008 I think we are seeing the birth of a surprisingly good vintage. Yes, the acidity levels are higher than usual and the weather yesterday and today has not been very special but very little rain has actually fallen. Also it’s cool so any rot will take time to get established. As the following photos show the fruit is very clean and it is difficult to find any rot. 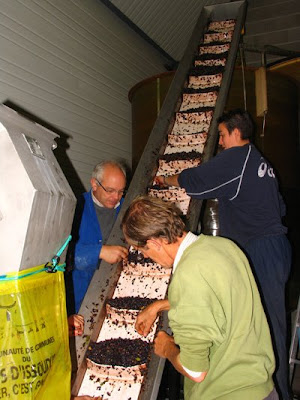 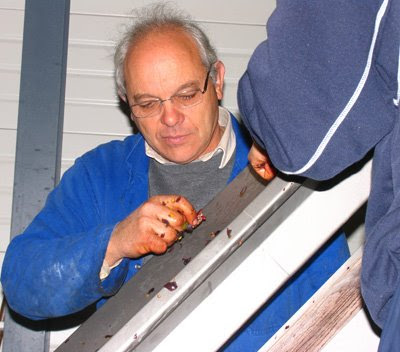 Claude Lafond at the sorting elevator

Tasting recently-pressed grape juice in Reuilly, Quincy, Menetou-Salon and Sancerre, the richness is impressive but, most importantly, the flavours are clean and precise.

Today we visited Claude Lafond (Reuilly), Jean Tatin and Chantal Wilk (Quincy and Reuilly), Pierre Jacolin (Menetou-Salon), Henry Natter (Sancerre), Jean-Max Roger (Sancerre and Menetou-Salon), Vincent Pinard (Sancerre), Lucien Crochet (run by Gilles Crochet – Sancerre), Vacheron (Sancerre) and Henri Bourgeois.
Claude Lafond (Reuilly)
We started in Reuilly. Almost at the end of the harvest Claude was clearly a happy man. “We started picking the Sauvignon Blanc on 22 September then the Pinot Gris and we will finish the Pinot Noir tomorrow. The Sauvignon is coming in at 13% to 14.5% with the acidity between 5 and 5.5.” We tasted the Sauvignon juice and that had begun its fermentation – it was rich, clean and precise. We also tasted some Pinot Noir juice with two vats having a slightly earthy flavour, while the third was very clean-flavoured. Doubtless the slight earthiness will soon disappear. 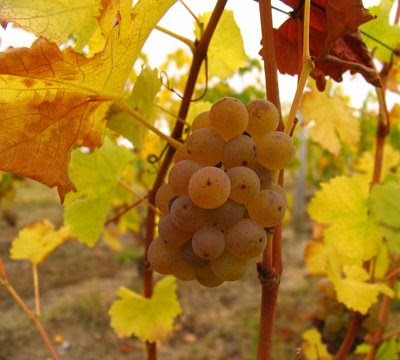 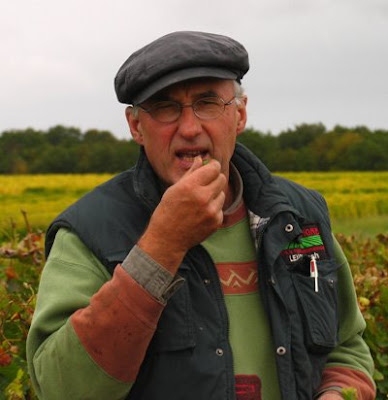 Jean Tatin checking the Sauvignon Blanc in Quincy
Jean Tatin and Chantal Wilk (Quincy and Reuilly)
Chantal and Jean were equally pleased with the harvest. “We started the harvest on 26 September and we are still picking.” Chantal gave us directions to the Quincy growers grape reception facility, where we found Jean. “It’s like 2006, which was a very good year,” enthused Jean, “The Sauvignon is coming in between 13% to 14% similar to 2006, which had a level of ripeness that hadn’t been seen in Quincy since 1959! It was September that has made the difference. Even though the temperatures have not been high during the good spell of weather it’s the wind from the north that has concentrated the sugars and acidity.” About 50% of Quincy is now picked and the rest is likely to be finished this week. 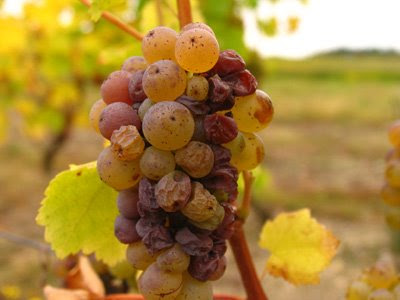 Sauvignon Blanc at Quincy with some noble rot
Pierre Jacolin, la Prieuré de Saint-Céols (Menetou-Salon)
"We’ve just started – Morogues is always later to ripen than Menetou-Salon and Sancerre. We are taking our time – we’ll pick some more later this week and then finish sometime next week.” I tasted juice of both the Sauvignon Blanc (clean like others already tasted). “The Pinot Noir is more complicated – I think the style will be similar to 2007.” 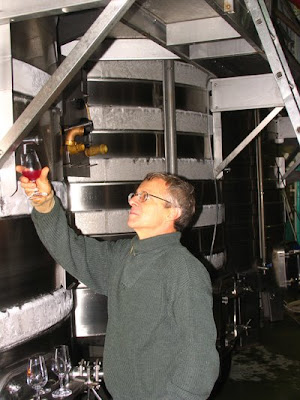 Pierre Jacolin, St Cerols (AC Menetou-Salon)
getting a sample of the 2008 Pinot Noir juice
Henry Natter (Sancerre)
We dropped in briefly to see Henry and Cécile Natter in the little village of Montigny. Henry was busy making preparations for the start off the vintage tomorrow. Being a little higher than Sancerre, Montigny, with rare exceptions like 2003, picks a little later than Sancerre.

Cécile Natter: "The year has been delicate and not an easy one. We expect the harvest to take about 12 days – ripeness is quite variable this year. The grapes have really developed well over the last eight days. We now have two of our children ¬– Auguste and Matilde – working with us.”

The Natter family now has 30 ha at Montigny, which includes 7 ha that Auguste and Matilde own jointly. We arranged to come back on Wednesday to see how the harvest is coming along. 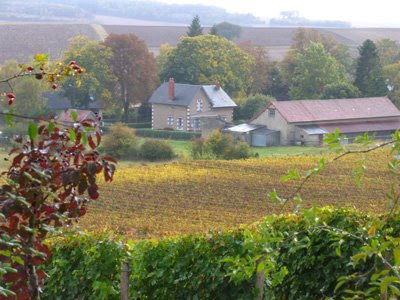 Montigny
Jean-Max Roger (Sancerre)
The village of Bué is chock-full of vignerons – a road sign says that 40 are ready to welcome you. Jean-Max was our first stop. “We started last Monday with the Sauvignon Blanc that had been affected by hail, especially at Thauvenay. Today we have been picking the Pinot Noir for our rosé. The grapes are between 11.5% and 12%. Tomorrow we’ll attack the Menetou-Salon. Then we expect to pick Thursday, Friday and Saturday. Our Sauvignon is between 12.5% and 13.5% with 5.5 gms acidity. This harvest is like 20 years ago – it’s a really classic year. We are very relaxed – taking our time and picking when the grapes are ready.”

Just to show how relaxed Jean-Max is – there was no sign of him when I arrived: he was out shopping, leaving his sons Etienne and Thibault to look after the Pinot Noir coming in.

We had time to taste three wines from 2007. The quite rich, gooseberry flavoured Menetou-Salon Le Petit Clos was showing particularly well. 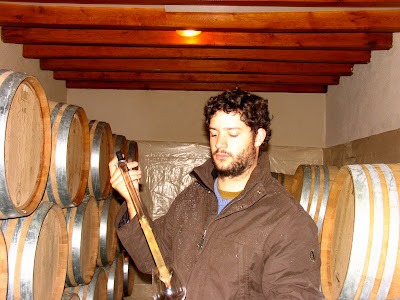 Clément Pinard in their chai pouring a sample of Harmonie 2008

Vincent Pinard
Vincent is about 150 metres down the road from Jean-Max. Vincent is happy to entrust his two sons – Florent and Clément – with looking after the vinification and the reception of the grapes, while he wields the secateurs with their team of pickers in the vineyard. Everything here is picked by hand with all the grapes, particularly the reds, checked over. Florent joined his father in 2001 and Clément in 2005.

“We started on Friday 26 September,” says Clément, “with the Sauvignon Blanc and finished on Wednesday 1 October. The SB degrees are between 13%-13.5% with 6 g acidity. We expect to finish the Pinot Noir (13% potential) tomorrow. We are very happy with the quality.”
We taste the juice from various cuvées – Clement comments favourably on their minerality and salinity. As with other producers the yields are down: 30-32 hl/ha in their parcels in Thauvenay – hit by hail; elsewhere 40/45 for the Sauvignon Blanc and 30-35 hl/ha for Pinot Noir. 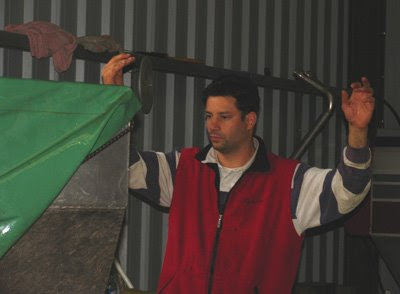 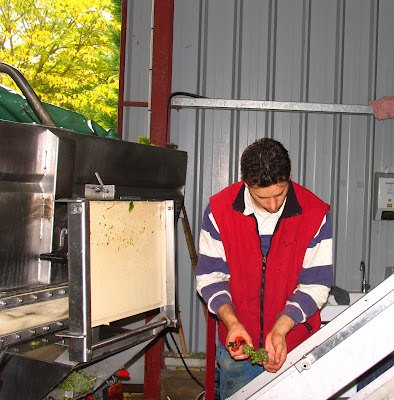 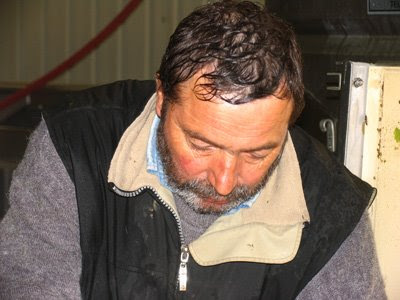 Gilles Crochet of Lucien Crochet
We arrived just as Gilles was coming in with his pickers at the end of the day with a load of Pinot Noir. I managed to snatch a few moments with him as he and his team were busy checking over the newly arrived Pinot Noir before it went onto the conveyor belt and into the vat. The fruit was clearly very clean with little needing to be discarded. 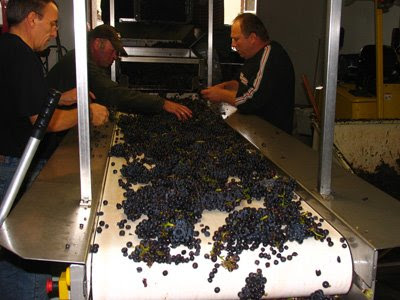 Sorting Pinot Noir at Lucien Crochet
Gilles: “We started picking last Monday (29th) and we are about half-way through the harvest now. Yields are probably between 45-50 hl/ha and the potential degree for the domaine wines is around 12.5. Apart from the 2008, we have just bottled our 2007 Chêne Marchand, which will be on sale in two to three months.”

I tasted Sauvignon Blanc juice from a couple of vats – as elsewhere clean and precise flavours. 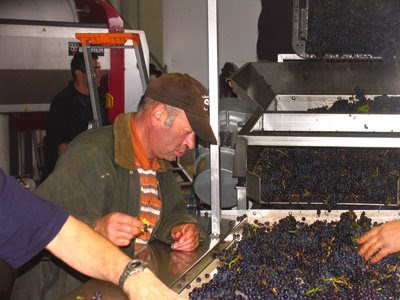 J-L and J-D “We started on Friday 26 September with the Sauvignon at Saint Romble, which had been hit by hail. Here the yield was 30 hl/ha. We harvested Saturday. Had a rest on Sunday and then harvested from Monday to mid-day Thursday when we stopped and started again this morning. We started on the calcaire (clay-limestone) on Tuesday 30th and on Les Romains the following day. We didn’t want to wait any longer, otherwise we would lose the minerality. Les Romains is already 13.5% potential but with 7.1 g acidity. We have picked about 60% of the Sauvignon and will start on the Pinot Noir this Thursday. Compared to 2007 there is more concentration in 2008, which we think will keep well.”

We tasted the juice for Les Romains 2008 – already very mineral with precise flavours. 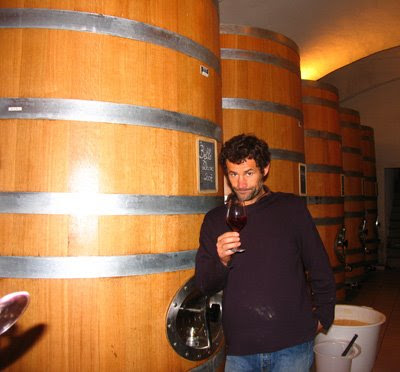 Jean-Marie Bourgeois – Henri Bourgeois
Jean-Marie was equally enthusiastic about 2008. One could be cynical and say – of course the vignerons are going to be enthusiastic about their new vintage. After all they have invested a lot of angst and worry since mid-March – concerns about frost, hail, conditions during the flowering, the treatment of mildew and other diseases plus the decision of when to pick – go too early and the grapes may not be properly ripe or go too late and the grapes are past their best. Few mothers are prepared to write off their newly born babies and, after all, the vignerons will have to start to sell their new wines in a few months' time. However, looking at the fruit in the vineyards, watching it come into the wineries and tasting the juice, it is clear to me that the vintage is way better than one could have imagined at the end of August. The fruit is clean, healthy with almost no rot.

I don’t have the experience or expertise to divine from tasting newly pressed juice how the final wine will turn out but any of us can taste grape juice and say whether the juice is clean and enjoyable to taste or whether it has rotten flavours. Everywhere the 2008 juice tastes clean with no false flavours.

“We started picking last Thursday,” says Jean-Marie as we head up the steep road towards the offices and winery. We start by tasting the Petit Bourgeois juice – their vin de pays made from juice they buy in from producers in the Cher Valley, who have to operate under strict quality controls but who are paid well over the going rate. The juice is impressively good – pure and with considerable richness. It’s the same with the rest of the juice we taste.

“We picked some of the Pinot on Saturday – between 12.55% and 12.8%. We are between a quarter and a third of the way through the harvest.” I ask Jean-Marie after his son, Arnaud, and Jean-Marie leads me to what appears to be a wooden panel at the top of the winery – on the same level as the grape reception. Here there is a secret, small wooden enclave where Arnaud, Jean-Christophe and Lionel Bourgeois are squeezed in, busy poring over the maturity data to decide where they should be picking tomorrow.