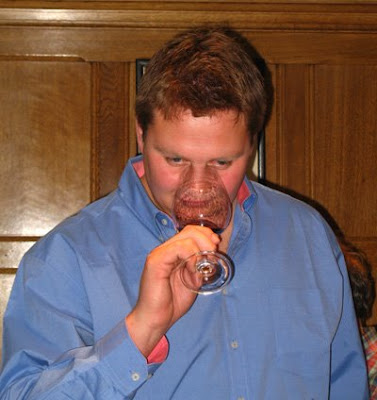 Bertho van der Westhuizen: the winemaker
Off to L’Oranger at the bottom of St James’s Street for a press dinner to launch various lines from Kleine Zalze, a South African producer based in Stellenbosch and owned by ex-corporate lawyer Kobus Basson. Hosted by Bertho van der Westhuizen, the winemaker, Ross Sleet, the export director, and Stevens Garnier, their off-trade distributor.

I started with a glass of their entry level, attractively fruited and characterful Foot of Africa Chenin Blanc (£5.20). It has a hint of sweetness. Bertho told us that it has less than five grams of residual sugar but my guess is that this is closer to five than to zero. Charles Metcalfe pointed out that the South African conception of dry was closer to the sweeter American one than to the European. 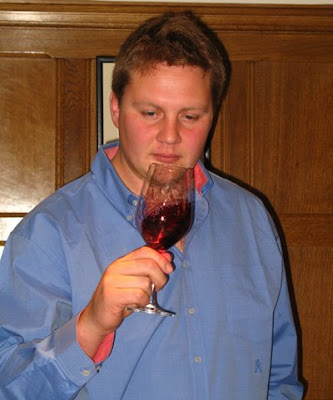 Bertho van der Westhuizen: the winemaker
The Zalze Bush Vines Chenin Blanc 2008 (£5.99) with richly textured, tropical fruit and fresh finish is next step up and worth the extra 79p. As with the first Chenin the fruit is bought in mainly from the southern part of Stellenbosch from vines between 25-40 years old. “This is old in South African terms,” said Bertho. “We are now picking Chenin riper than we used to which gives us greater complexity.”

Then onto the fine and honeyed Zalze barrel-fermented Chenin Blanc 2008 (£7.99). Fruit for this cuvée is chosen from three blocks, fermentation starts in stainless steel tanks before being transferred to 400 litre French barrels – no new wood is used. Any botrytised grapes are included, which shows on the honeyed aromas and rich texture.

Over dinner we drank the 2007 Vineyard Selection Chenin Blanc with the scallops with leeks and truffles and Jurançon dressing. The 2007 had attractive honey and quince flavours but was a less good match with the dish than the more racy 2008 Family Reserve Sauvignon Blanc (£19.99). The scallops were less successful than the delicious and perfectly cooked main course of rump of lamb en croûte of autumn fruits, aubergine and confit tomatoes flavoured with citrus. This dish was full southern French flavours with more than a nod to North Africa.

Our last wine was the Vineyard Selection Chenin Blanc 2006 – not currently available in retail but expected to be £24-£26 on a restaurant list. This series comes from Kleine Zalze’s own vines. The 2006 was wheeled out as an example of how Chenin can age, which was slightly bizarre as some Loire Chenin’s at a little over two years old are barely out of their incubators. To be fair the new winemaking team at Klein Zalze has only be in place for four years or so. However, I suspect that the citric but rich, honeyed 2006 with its touch of oxidation will age well, although whether it will have the same longevity as its equivalent in the Loire remains to be seen.

In my unbiased opinion the Chenins were the stand out wines of the evening but among the other wines we tasted the Zalze Shiraz/Mourvèdre/Viognier 2007 (S:70%, M: 25%, V:5%) was the clear winner in terms of value. This deep flavoured wine has lovely ripe, vibrant red fruits and is a snip at £5.99 (screwcap). This is one of the very rare occasions when the horribly abused expression ‘over deliver at the price point’ could be justified. As is often the case the value of the Family Reserve wines priced at £19.99 is less clear, although they are well made. 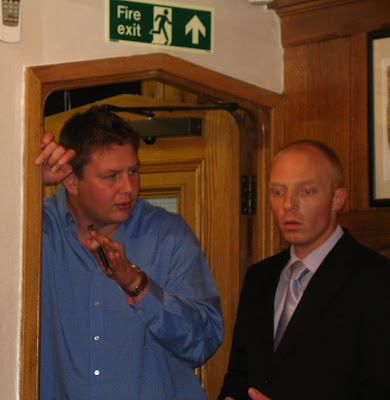 Bertho checks his escape route with the manager in case the reptiles get troublesome
A spokesperson declined to comment on whether there are any plans to launch an early morning range called Alka-Zalze.