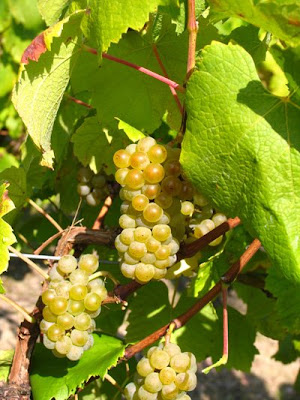 Due to the severe frost in early April the volume of the 2008 vintage is well below normal. Overall the estimate is that the frost destroyed 50% of the crop. However, this varies from sector to sector. “We lost between 20%-70% of the crop depending on the parcel,” said Monique Luneau of Domaine Luneau-Papin, Le Landreau in the Muscadet de Sèvre-et-Maine. “Overall we will make 40% of normal,” added Pierre. Pierre says that Joseph Landron has only made 12 hl/ha. Across in the Muscadet Côtes de Grandlieu Jérome Choblet of Domaine des Herbauges says: “Before we started picking we had hoped for 25 hl/ha but now we have started we will be lucky to get 20 hl/ha. With around 130 ha – 105 of Melon – Herbauges is the largest producer in the Grandlieu appellation. 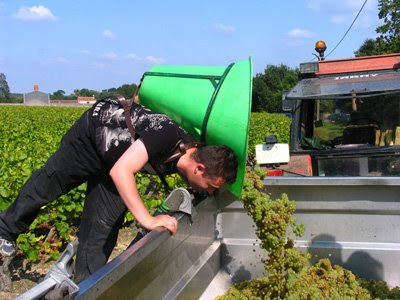 One of Pierre Luneau's pickers with grapes destined for Cuvée Excelsior
Fortunately the weather is good here: sunny but not very hot – the maximum temperature yesterday was just over 20˚C and the nights are decidedly fresh. Here and elsewhere in the Loire it seems a lot drier than during August – the grass is less green and the ground in the vineyards is dry and dusty.

“We started picking yesterday,” says Jérôme. “We checked the grapes on Monday a week ago (15 September) but they weren’t properly ripe ¬ only 9˚ alc but 8.2 acidity. Now we have 10.5˚-11˚ depending upon the parcel and 5.7 acidity. Waiting a week was very stressful as most of the producers around here were picking. 80% of all Muscadet has now been picked.” Assuming that their neighbours’ grapes were similarly barely ripe, it will be a good year for the bettravistes – sugar beet farmers of northern France. However, the high levels of acidity will be a problem. 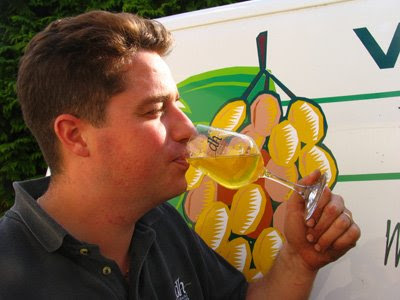 Jérome Choblet with 2008 Muscadet juice
At Luneau-Papin they are finishing the hand picking – yesterday was the last day – and the rest of the grapes will be picked by machine. Pierre Luneau was very relaxed yesterday – his main concern appears to be trying to get his new mobile phone to work properly. 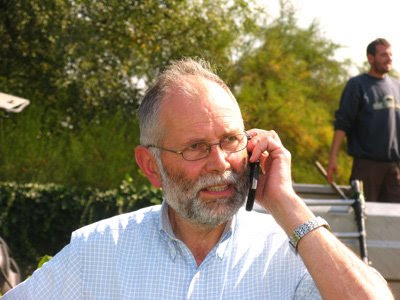 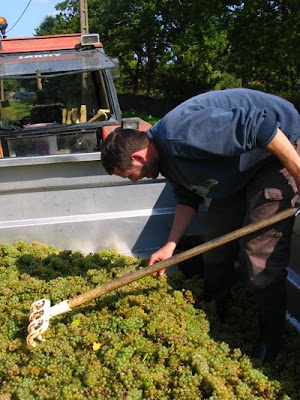 Someone has to work: Pierre-Marie Luneau checks the harvest 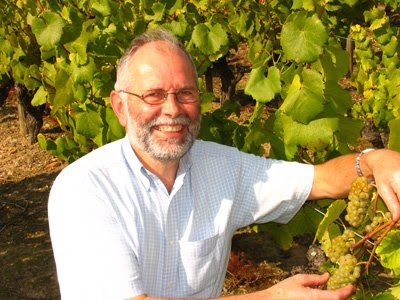 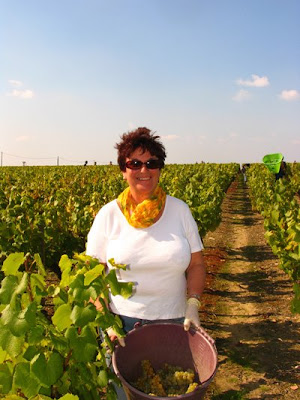 One of the givens of the harvest is that machines will break down – usually at the most inconvenient time. While we talked to Jérôme, his father Luc was busy repairing the picking machine, so that it would be ready to go next morning. 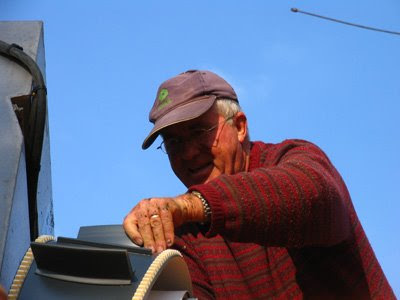 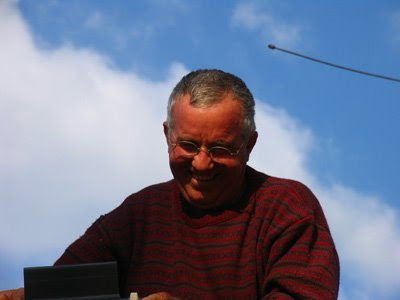 "That's better – cracked it!"
(25 September 2008)
Unfortunately the sky is grey this morning and it’s raining – a complete contrast to yesterday.
Posted by Jim's Loire at 08:15

If you're calling in to Eric Chevalier at Saint Philbert de Grand Lieu, say hello from all at Bubble Brothers!

That rain reached us in Eastern Touraine Jim, still not much of it and the weather is still warmish. Had a bottle of the 2006 L D'or with a seafood lunch at Pornic a couple of saturdays ago. One of my favourite Muscadets.

Thanks for your messages. Not time on this occasion to see Eric - another time. Sounds like the Nantais had more rain but it cleared up in afternoon. This morning (25th)fine but misty in Anjou.