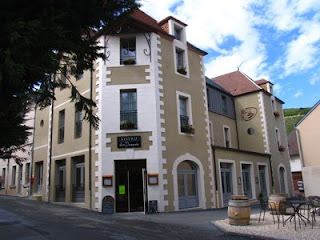 The new hotel, bistro-bar and restaurant.
(11 August 2008: Sancerre continued)
I’m amazed that it was as long ago as 1993 that Jean-Marc and Karine Bourgeois opened their fine restaurant La Côte des Monts Damnés right in the centre of Chavignol in the tiny square and across from the goats’ cheese specialist Dubois-Boulay (www.dubois-boulay.fr). Jean-Marc, a son of Jean-Marie, learned his craft at some of the grand names of French cooking: La Côte Saint-Jacques, Taillevent et Apicius. I have always eaten well at La Côte des Monts Damnés – often memorably – and drunk some good bottles from the wine list that focuses on the growers of Chavignol, although a place is found for wines from other communes in the Sancerre appellation!

One of Jean-Marc’s signature dishes is the delicious first course – tagliatelle and fresh chèvre. It is so good that I’m tempted to have it each time I go. Fortunately from time to time I resist – otherwise I would have missed out on the risotto avec les huîtres tièdes or the delicate feuillete au crabe that I started with this time. Sarah went for the tagialelle and wasn’t disappointed. My rognons de veau were excellent and we both chose the pear soufflé.

I tried to order a bottle of 1998 Clos de Beaujeu Sancerre Blanc from Gérard Boulay, a very good Chavignol producer a little in the style of Cotat and who deserves to be better known. (Gérard is now imported into the UK by Vine Trail: www.vinetrail.co.uk) I tasted the 1998 last year and very good it was – some evolution but still with a freshness. Sadly the restaurant’s stocks have now been exhausted. Having had a glass of Champagne instead, we opted for the silky, spicy and delicate 2005 Sancerre rouge from Henry Natter, whose vines are in Montigny at the extreme west of the appellation bordering the start of the Menetou-Salon AC. 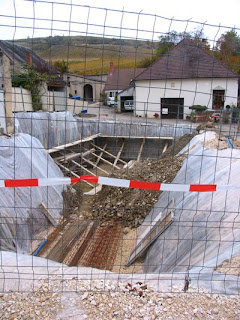 Early work on the new hotel at beginning of November 2007.
The big news here is that the once small restaurant has just expanded into a 12-bedroom hotel with a new restaurant, the old restaurant space having been transformed into a bistro. The hotel had just opened the day befrore our visit. Firstly Jean-Marc showed us the new kitchen area and then we sallied into the inevitable confusion upstairs with rooms still getting their finishing touches and piles of flat screen TVs waiting to be installed. It was difficult to judge properly, especially as some of the electrical supply had been turned off by the workmen, but there are some lovely rooms at a standard well above what is available elsewhere in Sancerre, with the notable exception of the chambre d’hôtes La Chancelerie in Saint-Satur. The strikingly patterned orange carpet in the corridors is, however, a brave choice. Rooms from €108-€180.

I hope the new hotel does well as Sancerre, which is popular with tourists and only a couple of hours at the most from Paris, needs some really good accommodation – somewhere to go for that special weekend. Until now the best hotel option has probably been the Hotel Panoramic, which as its name suggests has some great views over the vineyards of Chavignol and Verdigny. The Panoramic was taken over a few years ago by négociant, Guy Saget, and was given a much-needed facelift. Although considerably better than it was, the Panoramic remains a corporate business hotel.