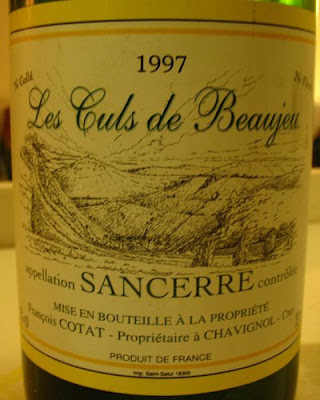 (15 September 2008)
Only the first three wines are still available, rest were drawn from the RSJ's reserve stock.

4] 1999 Sancerre [in magnum] André Dezat
Opened up in the glass, citric and mineral, still youthful. Well liked by many of those present. 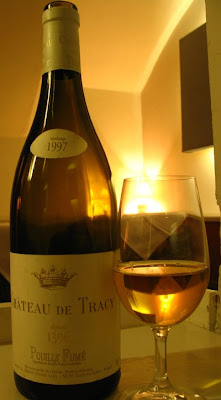 6] 1997 Pouilly-Fumé, Château de Tracy
Comte Henri d’Assay
Disappointing, both bottles badly oxidized. Served it anyway as an example of oxidation. Not clear whether corks were to blame or whether the fault lies elsewhere. Is this a similar problem to that suffered by some top end Burgundies from the same period?
7) 1996 Sancerre Dominique Midgeon
Last minute addition to replace oxidised Tracy. Still very youthful, quite lean.

8] 1997 Sancerre Les Culs de Beaujeu
François Cotat
Powerful, rich fruit matched by balancing acidity in the finish. Very good match with the fish.
9] 2004 Quincy, Cuvée Sucellus
Jean Tatin
Tasted on its own the oak was not yet fully integrated leading one to wonder whether there was enough concentration to carry the wood. However, much improved with the fish and a particularly good match with the salmon. Sucellus was the Gaullish god of agriculture, forests and alcoholic drinks.
Main course
Scallop, monkfish & salmon
Cress, crushed new potatoes
Peas & broad beans
White wine veloute 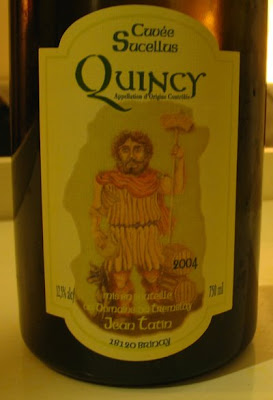