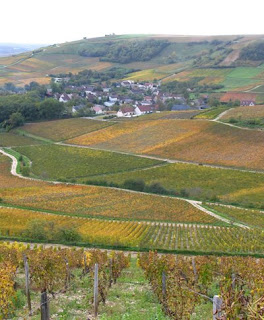 The wine village of Bué on a better day.
(Trip to Sancerre and Pouilly – continued: 12 August 2008)
Overnight the rain poured down incessantly and it was still raining steadily when we set off to Bué and our early appointment with François Crochet. François is already established as one of Sancerre’s brightest young vignerons. I first visited him in June 2006 when researching my Sincerely Sancerre article for Decanter (www.decanter.com/archive/109889.html). The purity of expression and the precise minerality of François’ wines impressed me then and they still do.

François has vines in Bué, Crézancy, Sancerre and Thauvenay – often in small parcels. There is just under 11 ha in total – one third Pinot Noir and two thirds Sauvignon Blanc. 70% of the vines are on the caillottes (often pure limestone), 20% on terres blanches (clay-limestone) and 10% silex (flint). François picks by hand and with his fragmented vineyards this presents problems. The customary quality option is to pick into cageots (small crates) but having lots of small parcels this is logistically nightmarish. Instead he uses small vibrating bins, which he is very pleased with as they keep the fruit whole with very little juice in the bottom of the bin. 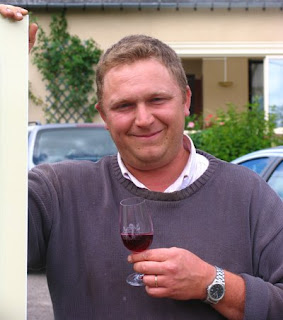 François lamented the poor state of the Clos de la Poussie, Bué’s famous amphitheatre-shaped vineyard just to the north of the village. “It was cleared of scrub during the Second World War and replanted.” (* I assume that it was planted with vines before phylloxera and then abandoned afterwards. Les Monts Damnés at Chavignol were largely abandoned after phylloxera.) “The Clos was split between a number of owners until during the 1990s it was bought by Ladoucette.” (The Baron is Pouilly’s largest individual grower). Unfortunately the use of tractors on the steeply sloping vineyards has apparently caused some severe erosion as the ground has become compacted thus accelerating water run off. Parts of the vineyard are now so badly affected that the tractors can no longer be used. Next time I’m in Sancerre I’ll have to make a point of having a look at the Clos de la Poussie – certainly in September 2007 parts were badly affected by mildew – but then so were many vineyards as 2007 was the ‘best year’ for mildew for a long time. 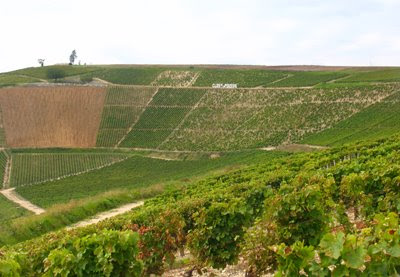 Le Clos de la Poussie
However, it is disappointing if part of the area’s patrimoine hasn’t been looked after properly. François was clearly angry at what he saw as neglect – probably doesn’t help that the Baron L is from over the water (La Loire) so is un étranger in these parts. (Although Sancerre and Pouilly are near neighbours – around 16 km distance by road – they are separated by both the Loire and administratively – Sancerre is part of the Loire, while Pouilly is part of Burgundy. It can be a tense relationship – of which more later.) 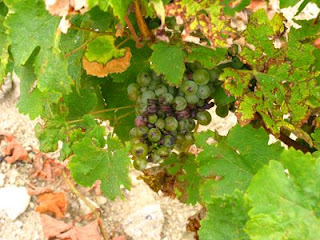 Mildew affected vines and grapes in the Clos de la Poussie: Sept 2007
Where the vineyards are on steep slopes François uses grass to limit erosion, on the more gentle slopes the ground is tilled. “As a paysan you have to observe what works,” François explained, “and adapt accordingly. If you get very heavy storms you can’t avoid erosion but you can take steps to limit the damage as far as you can.”

We started our tasting with 2006 Sancerre Rouge ‘Tradition’, which comes from vines that average 25 years old grown on the terres blanches. François uses a cold soak for four or five days before fermentation begins. He doesn’t use pigeage (plunging). “It extracts rustic tannins that I don’t want.” The rich, concentrated and black fruited Maricigoué 2006 Sancerre Rouge is from limestone vineyards. It spends 12 months in 500 litre barrels with a total élévage of 18 to 20 months. This year the 2008 Tradition will be aged in conical wooden vats of 40 hls, with the barrels reserved for the Maricigoué.

The Maricigoué 2006 is another example of the red revolution that is gathering pace in Sancerre as an ever-increasing number of producers look to make more ‘serious’ red Sancerre rather than a light, easy quaffer. There ought, however, to be a place for the more traditional style – ready young and enjoyable chilled on warm, sunny days – as well as the ‘serious’ stuff.

As expected the whites were wonderfully pure and mineral. Once again the 2007s showed here what wonderfully razor-sharp flavours this vintage has in the dry whites.

“I’m looking for purity and precision,” explained François. “I’m sometimes reproached for not weight and volume in my wine. The Chêne Marchand vineyardon caillottes has a tendency to get over-ripe. The maturation is slow but then there is only a very short window to pick at the optimum moment before the grapes become too ripe. I think the Chêne Marchand 2007 is better than 2005 when the grapes were a little too mature, while in 2006 they lacked acidity.” I really liked both the grapefruit and saline 2007 Les Amoureuses (argile-calcere) and the 2007 Chêne-Marchand but the latter edged it with its concentration and extra racy minerality.

Before leaving we admired the foundations of François’ new winery that he is having built behind his house. To be ready for the 2009 vintage.