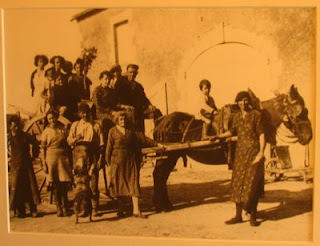 Jean-Claude Dagueneau, Didier's father,
on a horse as a young boy.
(12 August 2008: Didier Dagueneau @ 3 Rue Ernesto Che Guevara 58150 Saint-Andelain)
I never really feel I know where I am with Didier: rather like tiptoeing across eggshells. Sometimes the shells remain whole – sometimes, perhaps with no warning, they break into pieces. Didier can be charming as he was the last time I met him in mid September 2007 during a press trip, which included a very fine tasting of his whole range over several vintages held in his converted chapel. (To be posted shortly.) In contrast, I well remember tasting from barrel with him many years ago. After tasting several samples I observed that the wine we had our glasses “had a little more wood”. Not intended as a criticism, merely an observation on an unfinished wine. Didier immediately snapped: “This is a professional tasting.” Perhaps it was a misunderstanding – those egg shells again. 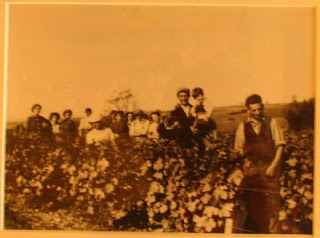 Vineyard portrait of the young Jean-Claude with his father Louis Dagueneau.
Louis was one of the wine-makers who inspired Didier.
He was forbearing on the first occasion I met him back in the early 1990s. I had a long afternoon of visits organised by the producers of Pouilly, who had been over-optimistic about how much ground could be covered reasonably in a day. Didier was the last visit and, as so often happens, the programme had slipped, I was hopelessly behind time and we arrived at 3 Ernesto Che Guevara, Saint-Andelain well over an hour late. Very sensibly Didier, who then had a striking golden halo of hair, said that a visit to the cellar was out – it was already well after 7pm and a cold mid-January night. Instead he opened a bottle of Silex – I have no recollection of the vintage though I might find it buried in a notebook somewhere – and we chatted.

Whatever the year the Silex was it was delicious. Didier is certainly a beacon of quality in Pouilly-Fumé, an appellation that can too often be disappointing and offering poor value for money in comparison with the best Sauvignons from eastern Touraine. 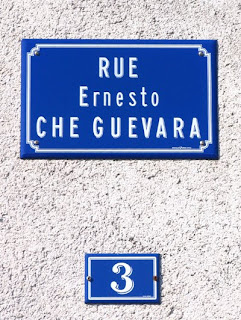 Didier Dagueneau's abode in Saint-Andelain
(12 August 2008)
On this occasion, it was still pouring with rain when we added our hire car to the array of motors already parked in and around the Rue Ernesto Che Guevara– would the eggshells hold today?

We never did find out as it was his daughter who looked after us. Although we were able to taste some of the 2006s, tasting the 2007s out of barrel was out as Didier was not present. This was disappointing as I had agreed the appointment with Didier back in early July, although he did warn then that he might be away. However it was clear that he was around as his daughter, who has just returned from three years in Burgundy with Faiveley, asked us whether we had already seen him.

We tasted three Pouilly-Fumés from 2006 – the Blanc Fumé, Pur Sang and Silex. All three were showing the weight that many 2006s (PF and Sancerre) have taken on. Pur Sang from three hectares on argile calcere had rich, very pure fruit, power and length, while Silex showed gentle wood spice, weight and a lovely minerality in the finish. We finished with ripe, minerally Les Monts Damnés 2006 from Didier’s 0.57 ha estate in Sancerre. We asked what the taste difference was between Sancerre and Pouilly-Fumé. “More floral and more acidity,” was the response. The higher acidity certainly showed on the Monts Damnés.

Sarah was shocked and appalled to see the cellar price of Asteroïde – €460 a bottle if I remember correctly. It is, however, from a tiny parcel of 18 rows of ungrafted vines in the La Folie vineyard (source of Pur Sang) at Moussard, north east of Saint Andelain but we didn’t taste it. Pity, too, that we didn’t have the opportunity to taste the 2007s that would have given us a fuller picture. Difficult not to contrast Didier's non-appearance with Jean-Marie Bourgeois, who unbeknown to us very kindly put off his departure on holiday by a day so that he was there to receive us yesterday. So our visit was brief and not the highlight that Sarah had hoped it would be.

Still raining and having much more time than we envisaged we did a quick circuit of some of Pouilly’s vineyards – passing by Ladoucette, Les Loges and the very pretty hamlet of Tracy right by the Loire– before heading back to Sancerre to visit La Maison des Sancerre.
Didier Dagueneau, 3 Rue Ernesto Che Guevara, 58150 Saint Andelain. Tel: 03.86.39.15.62
Posted by Jim's Loire at 14:53