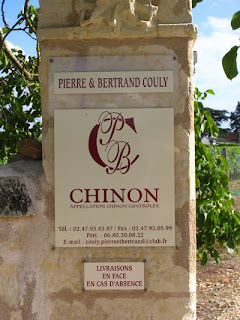 Entrance to winery at Saint-Louard
(14 August 2008)
Couly-Dutheil used to be one of the main pillars of the Chinon appellation. Unfortunately family splits and legal action have recently left marked cracks in the plinth.

Couly-Dutheil was founded in 1921 by Baptiste Dutheil. In 1925 Baptiste bought part of the Clos de l’Echo, one of the Loire’s most famous vineyards, which was apparently once owned by the Rabelais family. The Clos de l'Echo, now 22 hectares and a Couly-Dutheil monopole, lies on top of the coteau just to the west of the Château de Chinon. Couly-Dutheil was developed and expanded by René Couly, who married Madeleine Dutheil. Later René’s sons, Pierre and Jacques, took over the running of the business, where in time they were joined by the 4th generation: first Bertrand, Pierre’s son, and then Arnaud, son of Jacques. Having completed his wine studies at Montpellier, Bertrand gained experience in Pomerol, Châteauneuf-du-Pape and Oregon before returning to Chinon taking charge of viticulture and winemaking at Couly-Dutheil.

The family problems appear to have arisen when Pierre reached retirement and, whatever the rights and wrongs of this very sad family feud, it has resulted in Pierre and Bertrand setting up on their own, based at Saint-Louard, a quartier in the western part of Chinon, while Jacques and Arnaud run Couly-Dutheil. Meanwhile there is extended litigation over dividing the vineyards and the monies up.

Bertrand was willing to talk to us about the rift. He seems perplexed and puzzled over what has happened. “I still don’t understand,” he tells us. “In 2005 I was not allowed into the Couly-Dutheil winery. I still own 42% of the company.“ Bertrand says that he has received no money from Couly-Dutheil. However, Jacques Couly says that Bertrand has received 650,000 €.

“Fortunately in 2005 a number of good friends in Chinon gave me grapes and allowed me to pay for them later. They also lent me their facilities to make wine. My father and I now have 13 hectares of vines – some in Beaumont-en-Véron. Recently the tribunal ruled that the 2 ha La Haute Olive, which is just above the Clos de l’Olive (3 ha), is ours and I hope that they will make the same decision over Le Clos de l’Olive.” At present there is 8 ha to come from Couly-Dutheil, with more vines still in dispute. Perhaps in time they will have between 30-40 hectares. Pierre and Bertrand now have a winery with a capacity of between 100-150 hls. 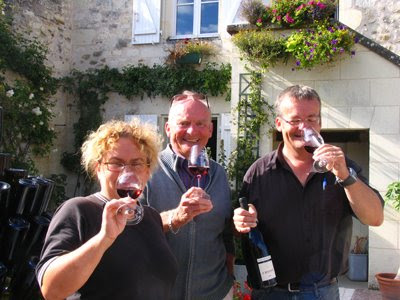 Michelle, Pierre and Bertrand Couly
Back in the tasting room we met up with Pierre along with Michelle, Bertrand's wife. It was very good to see him looking so well and cheerful as earlier this year it looked like he was about to die. In early April Pierre, due to have a hip operation, collapsed into a coma for a least a couple of weeks. It seems likely that the strain of litigation played its part. Thankfully he pulled through and has recovered well.

“Initially when we set up on our own we didn’t have the best terroir,” explains Bertrand, “so I had to make wines with soft fruit – ready to drink young. Excluding the small range of négociant wines from nearby appellations, they are currently making three Chinons: a rosé, a domaine red and Le V de Couly – so named because Vincent, Bertrand’s young son said that there was room to put a V into the name. The straight red Chinon 2007, bottled in February 2008, (€6.80) is easy drinking with light cherry and plum fruit with a hint of spice. Le V de Couly (€7), which comes from vineyards on the other side of the road to Avoine and Bourgueil from the Château de Coulaine, has more weight and structure. It was bottled in June.

As it would seem to be far too late to put Humpty-Dumpty back together again, I hope the legal process is concluded soon allowing all parties to get on with making and selling wine.

It would also be good to see Couly-Dutheil drop the nonsense that is the Clos de l'Echo Crescendo. As a famous vineyard Clos de l’Echo should be the grand vin and anything that isn’t up to scratch should go into a second wine or another cuvée. What would anyone make of a crescendo of Latour?

21st November 2008
Another perspective
I'm planning to visit Couly-Dutheil either in late December 2008 or early January 2009. Mainly to discuss their current projects and wine-making philosophy including their take on Crescendo – there will be no 2007 and I understand that it is very unlikely that Crescendo will be released in 2008. I would have been surprised if 2007 had been considered worth of release.

The visit will also be an opportunity to have another perspective on the unfortunate dispute that has riven Couly-Dutheil.