Sign on the bridge at Pouilly-sur-Loire
(12 August 2008: Pouilly-sur-Loire)
To get to Domaine Serge Dagueneau et Filles in Saint-Andelain we took the truss bridge (built in 1902) across the Loire into Pouilly-sur-Loire. The bridge marks the halfway point in the Loire’s long almost 1000 km journey from the Mont Gerbier de Jonc in lower part of the Massif Central and only a little over 100 km from the Mediterranean. On the eastern side of the bridge there is a small plaque that indicates that there are 496 km upstream to the source and 496 km to the Atlantic.

It is rare for women to be prominent in family wine businesses in the Loire. Yet it is often the women who keep the show on the road, frequently unheralded. Often they keep the books, receive visitors and organise the pickers without getting official recognition. Here at Serge Dagueneau the women – his wife and their two daughters – are centre stage and, in a patchy appellation, this is a domaine I’m happy to recommend. 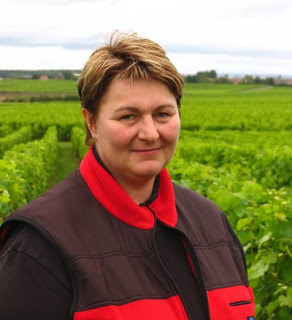 Florence Dagueneau
Florence Dagueneau met us – she has been working here full-time since 1987. We started with the soft and lightly grapy 2007 Pouilly-sur-Loire made from a small half hectare plot of Chasselas handed down from her great grandmother. The vines were planted just after phylloxera. Once the main grape of Pouilly – albeit largely as a table grape – there are now only just over 30 ha left compared to 1205 ha of Sauvignon Blanc. Although Florence told us that both Thierry Redde (Michel Redde et Fils) and Sophie Guyollot (Landrat–Guyollot) have recently replanted some Chasselas – perhaps to ensure that part of Pouilly’s history does not die out. In addition to their small parcel of Chasselas, the Dagueneau family has 17 ha of Sauvignon Blanc for their Pouilly-Fumé plus an additional couple of hectares in the VDP Coteaux-Charitois, a little to the north east of the market town of La Charité. These are planted with Chardonnay, Pinot Noir and Pinot Beurrot – a local name for Pinot Gris.

Like some other parts of the Loire (Muscadet’s crop was reduced by some 50% by the frost of 7th April), Pouilly has not been treated kindly by the weather this year. On 24th June a violent hailstorm tore through parts of the appellation causing severe damage. Unfortunately the Dagueneaus were amongst those hit. Florence took us out into the vineyard by the winery to show us some of the damage. 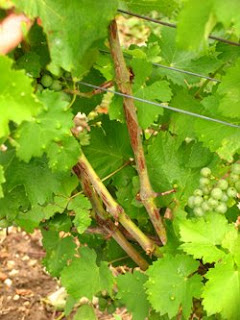 
“About a quarter of Pouilly’s vineyards were damaged. We have lost some of the crop, although we have a few grapes left here. Many of the canes have been lacerated by the hail and this will make it difficult to prune this winter – finding suitable canes that are not damaged.”

Back to the tasting – starting with the straight grassy 2007 Pouilly-Fumé, which makes up 90% of their production. The 2006 is richer and more perfumed. In the terroir series, Clos des Chaudoux comes from vines close to the winery of Michel Redde et Fils on clay limestone marne kimmeridgean soils with their characteristics fossilised shellfish. There is an arc of marne kimmeridgean that starts in the Aube (Southern Champagne region) appears in Chablis and reappears here in Pouilly-sur-Loire, Sancerre and Menetou-Salon. It ends in Quincy and Reuilly but is submerged here under the alluvial soils brought down by the Cher from the Massif Central. (See James E, Wilson: Terroir, Mitchell-Beazley pages 244-256.) The 2006 Chaudoux has some attractive weight and minerality from yields of 40-45 hl/ha. However I preferred the concentrated and rich 2006 La Leontine from limestone soils. Vinified in barriques of three wines it has a light touch of wood, some yellow plum, butter and an attractive touch of bitterness at the end. We ended with the very ripe, apricotty Les Filles 2005 on flint and from grapes grown on flint and harvested two weeks after the rest.

Then a quick look at the Coteaux Charitois with the soft and spicy 2006 Pinot Beurrot being the most interesting, although the light coloured Pinot Noir was agreeable as was the sparkling made from a cocktail of the rest of the varieties that aren’t planted in sufficient quantity to vinify separately. 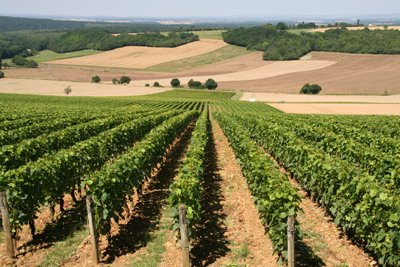 We had time to grab a quick omelette and chips at the rather run down Bon Accueil on the northern end of the main drag through the centre of Pouilly before heading up to Saint Andelain for our 2pm appointment with Didier Dagueneau.