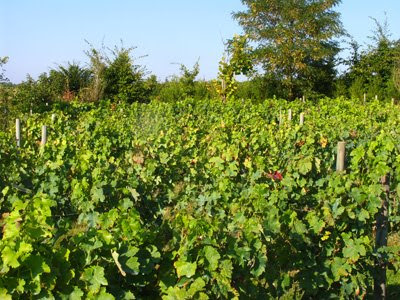 Epeigné's 'grand cru' vineyard
The 2008 harvest starts today in the only ‘grand cru’ vineyard in Epeigné-les-Bois, as Mark Robertson reports:
'Yes we’ve had some good weather for the past 10 days or so. We helped James pick his Chardonnay and Sauvignon yesterday and will pick our Sauvignon today. Grapes are very ripe – but there are very few of them! Cabernet and Côt are ripening slowly and are probably close to 11 degrees or will be tonight. There’s a spot of rain forecast for Tuesday and the first few days of October, but the grapes are healthy and providing the rain is only light we should be able to hold on until the second week of October, which is the goal. Elsewhere in the area pickers are out for the whites – weather is really nice at the moment and it was a pleasure to be in the vines yesterday.' 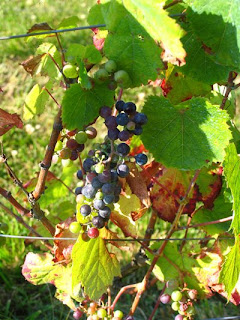 The light crop of Côt (three years old)
ripening late August 2008
Mark’s organically tended vineyard (5 ares) may well qualify as the smallest in Touraine. A true garagiste, destemming is done by hand and takes far longer than the picking. “The smallest quantity I can make is 15 litres,” says Mark. His first vintage was 2005 when the Cabernet was very successful.

Update 22 September: less a garagiste more a cyclist – only about 6 litres harvested.
Posted by Jim's Loire at 10:06

Embarrassingly small recolte Jim, would put Chateau Yquem to shame. Comes to something when you debate whether to quaff the vintage in a couple of pint tumblers ! Still not worked out if the low yield might in part be "chicken related" but the barriers are now up. Red yield looks much more promising(it'd have to be !) and we bottled some of the 2007 "Tradition" (cabernet/cot)on Sunday to fill in the spare time. Very pleased with this wine from what was a difficult year. It accompanied the vendange dinner of roast duck with marinated cherries a treat.

Must be almost as rare as Pétrus Blanc!