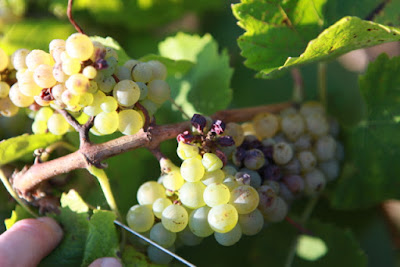 
Harvest Report 2016
The 2016 vintage will remain forever in our minds and memories, it is exceptional in more ways than one.

First, it celebrates the 200th anniversary of Joseph Gregoire Lieubeau's birth. The child, orphaned on 1816, the 10th of May, under the porch of Nantes “Hotel-Dieu”, is the founder of both family and winery.

Distributors, wine shops, sommeliers, partners Chefs... This was our pleasure to welcome you at Stereolux arts hall to celebrate this anniversary at the foot of the “Ile de Nantes Machines” Elephant. Another important event is our sister Marie’s landing as she joined the winery this year in charge of management and direct sales.

The 2016 vintage reminds us how related to nature, in all its complexity, our winemaker’s life is. All at once, an exceptional environment in which we have the chance to live. We are protecting nature, who in return, enables us years after years to express the diversity of terroirs and vintages. Also that is a challenge to adapt and accept the climate up and downs which can seriously complicate the vineyard work. 2016 will likely remain the “superlatives vintage”, scenarized with a devastating spring frost worse than 1991, an historic mildew pressure greater than 1977 and a summer drought dryer than 2003. 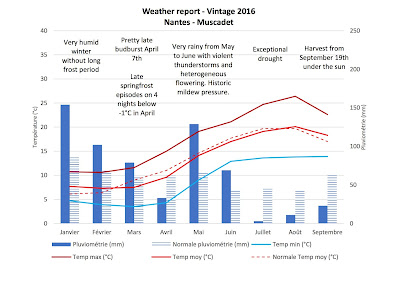 The vineyard year began on a wet and mild winter with no real extended frost episode. Several direct consequences on spring: a slower than expected budburst, around April 7th, a strong initial mildew inoculum, preparing an exceptionally high diseases pressure throughout the vintage, and a very rapid weeds development, requiring enforced soil care (plowing and/or natural grass inter-row cover), even more speaking about organic farming. In late April, the “Loire winemakers scariest nights”, we had 4 episodes (April 17, 24, 25 and 28th) of spring white frost with temperatures down to -1/-2 °C. These destroyed all hope of harvesting on the hillsides banks and significantly affected other plots to an estimated overall loss of about 20% of the yield.

May and June gave us no rest, with exceptional moisture, punctuated by violent thunderstorms (80mm recorded on May 29th). Despite a fierce fighting, a spectacular mildew development on leaves but also on fruits, causes severe crop losses. This was followed by an unusually dry summer with less than 15mm of cumulative rainfall on July and August (vs. a norm of about 100mm) causing hydric stress and a slight maturation slowdown on the most draining sandy soils. A few showers early September unblocked the situation.

In the end, the moderate temperatures recorded throughout the year led to a slightly late harvest that began on September 19th, a week after 2015. The harvest reached the Fruitière under the sun, with perfect sanitary state and signed again the historic identity of this vintage 2016. The strong September variations in temperature, the summer drought and the very limited yields have achieved alcoholic degrees and aromatic concentration that are historic in Muscadet area: 12.2% on average and over 13% on some very old plots. Paradoxically, dehydration of the berries related to drought and cool night temperatures have also helped maintain concentration by rather high acidity levels (average 4.4 g/l), announcing full bodied but balanced wines with the greatest aging potential. Finally, yields are exceptionally low due to the disastrous spring weather conditions, around 25 hl/hectare on average at the winery.

2016 also achieved our second year of organic farming conversion (under Ecocert certification), an additional challenge on this vintage. On plot selections, the team skill and experience improvement, generalized soil plowing, sexual confusion, regular cares based on natural or mineral preparations (copper, sulfur, orange essential oil), manual harvesting, helped us keep the sanitary state and achieved an historic maturity. At the winery, our Crus are vinified without sulfites before fermentation, with natural yeast to respect the most natural terroir expression. With a little hindsight, and our natural optimism, this vintage 2016 will remain an excellent opportunity to enhance our learnings and improve our vineyard methods in hard climate conditions. From the quality of the grapes and first juice, the outcome is on the rightest track: a maturity and balance that are, like the 2016 weather conditions, exceptional and historic.

We look forward to present you this vintage 2016. Please do not hesitate to come back to us for any kind of further info,