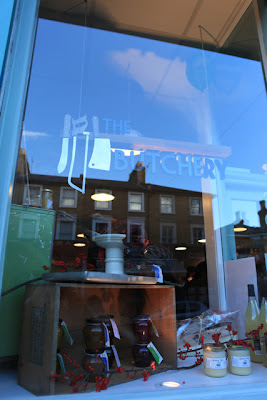 
News from the Forest Hill Society:

'The Butchery Limited, one of our stallholders from the Food Fair and a SEE3 PopUp, have signed a lease for 49 London Road. They are busy installing permanent refrigeration and hope to open the doors once more in early to mid February. We are delighted that another of our stallholders is moving into permanent premises and wish them well in this venture. Some people have asked why a local family was not given the chance to try the shop as a PopUp. Although Ruth and Nathan have an outlet in Bermondsey, they live in the heart of Forest Hill, so we couldn't get more local.'

This will be the first time Forest Hill has had a butchers in many years. There hasn't been one here since Dewhurst closed (no great loss!) some 20 or more years ago. There was also the much missed Miles & Son on Kirkdale but that is probably officially Sydenham.

Lewisham Hospital
The TSA for the South London Health Trust, Matthew Kershaw, presented his final report to the Secretary of State for Health on January 6. The Secretary of State now has 20 working days to review it and make a decision on the future of the NHS in south east London by 4 February 2013. The final report makes the same recommendations as the draft report. ie that the A&E and Maternity units at Lewisham Hospital are closed and that we all use King's College Hospital or Queen Mary Hospital in Woolwich instead. These plans could have serious impacts on health provision in South East London and, once implemented, cannot be undone as they are planning to sell off 60% of the land. If you haven't already done so, please sign the petition against the closure of Lewisham's A&E and Maternity unit. There is going to be a march from the roundabout outside Lewisham Station to Mountfield Park on Saturday, 26 January from noon to 4pm. Watch our website for details of where to meet if you would like to join us - we will probably meet in Forest Hill first.'