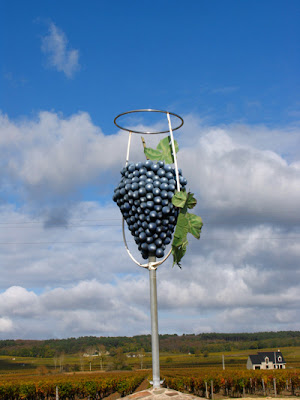 Grapes on a roundabout in Bourgueil plus vineyards
'Cette année 2012 est marquée par un double anniversaire : 10ème anniversaire de la fête des vins de Bourgueil à Tours et 75ème anniversaire de lʼAOC Bourgueil créée, parmi les toutes premières AOC en France, dès le 31 juillet 1937.'
I have been impressed by the way Bourgueil's PR since it declared its independence from Interloire. It has shown that a small appellation can be nimble and innovative. For 2011 they produced a very useful booklet showing dates and details of their producers' Portes Ouvertes. At the Salon des Vins de Loire they had a common stand with many wines that could be quietly and quickly tasted. Also at the Salon they held a celebration of their 75 years as an appellation with journalists and many others invited. This was then filmed and posted on the web.
However, claiming that Bourgueil is 'parmi les toutes premières AOC en France' (one of the very first appellations in France) is stretching things too far! Certainly it is true that they are much older than recent appellations like Châteaumeillant (9th June 2010) or even more recently Coteaux d'Ancenis (autumn 2011).
Although a relatively early AC, Bourgueil is not one of the Loire's oldest – that distinction goes to Quincy recognised as an AC on 6th August 1936 – nearly a year before Bourgueil and just a few months after Châteauneuf-du-Pape, a leader of the AC movement, was recognised on 15th May 1936. It's puzzling that Quincy, a small appellation in the Cher Valley, managed to be the first Loire AC. Richard Kelley ascribes this largely to the advocacy of Emile Roux, a dynamic producer at the time, and whose niece (Maryline Smith) now runs the domaine – Domaine de Villalin. More evidence that there are times that human influence can be more important than terroir!
A number of other Loire appellations were recognised in 1936 – Sancerre (10th November – for whites only as reds and rosés were not recognised until 1959), Saumur (14th November – for still wines) and Vouvray (8th December). (NB Illustrative not a definitive list).
Outside the Loire such minor appellations such as Champagne (29th June), Barsac (11th September), Gévrey-Chambertin and Pommard (also 11th September), Sauternes (30th September), Pauillac (14th November) and Morey Saint-Denis (8th December) along with its grands crus of Clos Saint-Denis et Clos de la Roche were all recognised in 1936.  Again certainly not a definitive list.
Over eight months later – 31st July 1937 – Bourgueil got its appellation contrôlée along with a basket of other Loire ACs – Chinon, Muscadet, Pouilly-Fumé and Pouilly-sur-Loire. All more four months after Hermitage got recognition on 4th March 1937.


Bourgueil amongst France's very first ACs – certainly not, though it might just scrape into the first 50! Further research needed!
Posted by Jim's Loire at 11:50

Fascinating piece of investigational journalism, Jim !
But what’s the point of « being first » ?
The first “concentration camps” seem to date back to the XVIIIth century and were Russian (in Poland). Then we had some in the US – for Cherokee indians in the 1830’s.
The Brits were pretty early too: during the second Boer-war (an estimated 25.000 people), at the turn of the century. But you had a previous hands-on experience in what was to become Pakistan (with people burried alive) as early as 1843.
In present time, Guantánamo is a pretty good example.
“Those who are first will be last ....”

Nor am I sure that I would dignify a quick trash around Google and Wiki as investigative journalism, mais bon..

There is, however, possible interesting research here into what were the factors that gave ACs early to some established areas, while others equally well established were given the gong a little later and, in some cases, much later.

Yes Jim. It’s always a mix (blending is part of my trade) between empathy ( + respect in this case) and teasing. But you may be surprised to read the only place I use to go to pubs is ... UK. Belgium is very much a “café culture”, but I never indulged myself. And locally, only commercial rugby is the topic ... not something to my liking. I had hoped – not being as naive and straightforward as one may think – you would come up with this remark about the human factor. As always in France, all that counts is networking, far ahead of all other considerations (including quality, volume, foreign reputation ...). The first appellation of them all (or at least the most famous because of its Baron), C D P, never grew as much as under the chaimanship of .... M. Quiot!