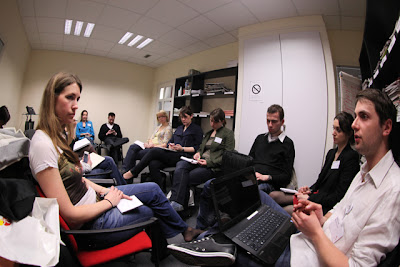 Session on Le Loi Evin with Arnaud Terrison on right with laptop
The first session I attended at yesterday's Vinocamp-Loire was on the Loi Evin. It is now over 20 years that the Loi Evin (1991) passed into French law. Designed to reduce alcoholism it introduced severe restrictions on how alcohol could be portrayed and advertised in the French media. Arnaud Terrison of Vin et Société (V&S) gave a round up of the current situation. Arnaud explained that that V&S were not against the aim of the law but rather the way that it restricted the way the culture of wine could be portrayed and the confusion that exists over what is allowed under the law.
The case of an article called Le triomphe du Champagne that appeared in the Le Parisien on 21st December 2005 and was subsequently judged to constitute publicity. Several at the session commented that the restrictions of Loi Evin had encouraged creativity in advertising. Perhaps but this is like saying: "I'm glad I lost a limb as it has made me use my remaining limbs more creatively."
In discussion it emerged that there is a considerable amount of auto-censorship by journalists and advertising companies. In addition companies frequently receive letters warning them that a particular campaign or article has overstepped the Evin mark. Not surprisingly there are apparently many more letters sent than cases that come to court.

When the Loi Evin was passed in 1991 the internet as we know now it didn't exist. To date the act has been interpreted to mean that anything not cited as allowed under Evin is banned. Initially mention of alcohol on the net was banned but the law was modified in July 2009 to allow alcohol to be mentioned and advertised on the net. Blogs, Facebook and Twitter now pose considerable problems for application of the Loi Evin – difficult to pursue potentially multiple breaches of the Loi Evin by bloggers, tweeters etc. especially on sites that are not based in France. To date the tendency is to pursue only large drinks, media companies or the Interprofessions, although there appears to be a reluctance to take on media stars like Jean-Pierre Coffe.

It appears clear that in these changed times the Loi Evin needs both modification and clarification.
Posted by Jim's Loire at 14:05

Hi Jim! Loi Evin has a long way to go...but can it actually get worse than that? I cross fingers for our freedom of blogging...X