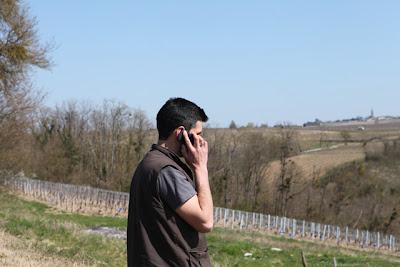 Staying in Sancerre for a couple of days for a big tasting of 2011s from the Central Vineyards. La Revue du Vins de France has kindly allowed me to join their tasting, which starts today and will run through to Thursday.

The amazing summery weather, which started here on last Wednesday (21st), continues with cloudless skies and temperatures up in the early 20s C. The fine weather has made a big difference to all the plants over the last week with leaves and blossom bursting out.

Yesterday we headed across from Touraine and had time to fit in a couple of excellent visits in Pouilly-Fumé: to Jonathan Pabiot in Les Loges and then to Sébastien Treuillet further north in the appellation in the hamlet of Fontenille. There will be a separate post for Sébastien.

Jonathan Pabiot
Jonathan comes from a family of vignerons.  Leon, his great grandfather, was a nurseryman, which is how the family started becoming involved in vines and winemaking. At that time polyculture was the norm. Lucien, Jonathan’s grandfather took over, followed by turn by Didier, his father. When Didier started the family cellar was still in cramped premises in the villages of les Loges.

In 1987 Didier Pabiot moved up the hill and built a new house and chai above Les Loges. Jonathan started on his own in March 2005 with some three hectares of vines after doing his training at the Lycée Viticole de Cosne and then worked at Domaine Leon Barral (www.domaineleonbarral.com) in Faugères. Last year Jonathan and his father joined forces and they now have a total of 18 hectares of vines in various parcels.

Back in 2005 Didier farmed conventionally, while Jonathan started working organically from the start and then from 2006 started converting part of the vines to biodynamic culture. Now a part of the 18 hectares are biodynamic with the rest organic. “I don’t have the resources to convert all the vineyard to biodynamic culture, especially as I prefer to dynamise treatments by hand rather than use a machine.” 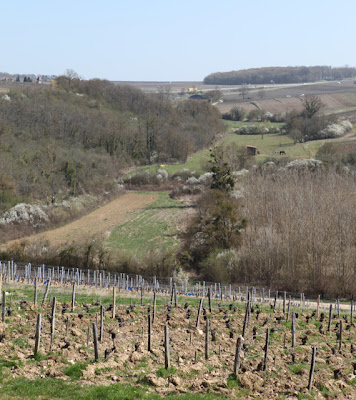 Jonathan cultivates all of his parcels of vines – building the soil up around the vines during the winter – butage. The soils are worked until May/June when he stops, otherwise the continued turning of the soil causes the vine to keep growing rather than concentrating its energies into ripening the fruit. Jonathan also grasses over some of his parcels. “Grassing over isn’t a simple solution here,” Jonathan explains. “If you leave the grass to grow over several years, then it starts to stress the vines because there is too much competition. So I allow the grass to grow for a year and then plough it back in.”

I spent a fascinating hour and a half with Jonathan visiting different parcels of vines. He explained their individual characteristics – it was as though he was talking about his children citing their strengths and weaknesses. 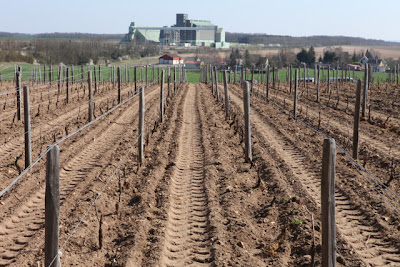 One of the last parcels we visited was Les Mattrays in the far south east of the appellations. Jonathan and his father planted this parcel about three years ago. It has never had vines on it before, so there are no residues of chemical treatments. The soil is very sandy with sand and flint underneath – its taking a while for the roots to get to any depth. They have also discovered that the soil is very acid.

The grapes here are picked by machine when the vines are on the flat, whereas on the slopes they pick by hand. "I reckon that picking by hand adds 30-40 cents to each bottle." 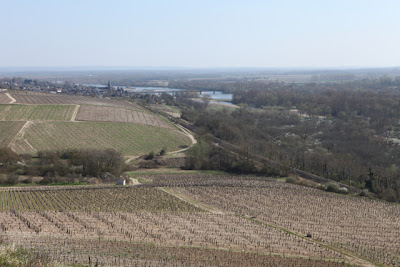 View from one of Jonathan's favourite parcels: Prédilection above Les Loges
and looking towards Pouilly-sur-Loire

At the end of my visit there remained only time for a quick tasting of some of the 2011s. With the exception of the Pouilly-sur-Loire none of the wines have yet been bottled – the first bottlings will be next week. Although rapid, it confirmed the good impression that I had of Jonathan's wines at Millésime Bio in January.

Despite Jonathan Pabiot's growing reputation, he has yet to find a UK importer.

Jonathan said Leon but I assume from your comment he meant Domaine Leon Barral but working with Didier?